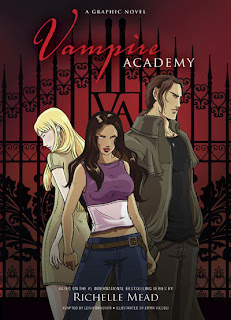 After two years on the run, best friends Rose and Lissa are caught and returned to St. Vladimir’s Academy, a private high school for vampires and half-bloods. It’s filled with intrigue, danger—and even romance. Enter their dark, fascinating world through a new series of 144-page full-color graphic novels. The entire first Vampire Academy novel has been adapted for book one by Leigh Dragoon and overseen by Richelle Mead, while the beautiful art of acclaimed British illustrator Emma Vieceli brings the story to life.

My Review
Vampire Academy is one of my favorite YA series. Ever. Therefore, you can imagine my reaction to the graphic novel.
I won’t go in depth on the review of the actual story, as it’s not a new one for many of Mead’s fans.  I did like the graphic novel because it gave faces to these amazing characters, especially Rose, Dimitri, Lissa and Christian.  The essence of the characters remains, thankfully, the same. Likewise, the graphic novel gives the reader a summarized version of the full novel and in my opinion the adaptation was really good.  It is interesting to see what the Strigoi look like; I always thought they look more… human.
VA Graphic Novel is a short and entertaining read and a must for VA fans.  How awesome is this cover?

I’m very excited to introduce Damaris to you!  She is the daughter of a dear friend, a teenager (in high school) and fellow book lover.  This is her first review at Reading with ABC. 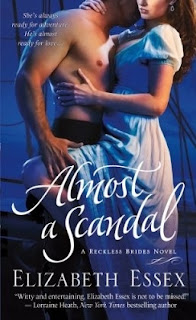 Bold, brazen, and beautiful, the Reckless Brides refuse to play by society’s rules of courtship. But—come hell or high water—they  always get their man… For generations, the Kents have served proudly with the British Royal Navy. So when her younger brother refuses to report for duty, Sally Kent slips into a uniform and takes his place—at least until he comes to his senses. Boldly climbing aboard the Audacious, Sally is as able-bodied as any sailor there. But one man is making her feel tantalizingly aware of the full-bodied woman beneath her navy blues… Dedicated to his ship, sworn to his duty—and distractingly gorgeous—Lieutenant David Colyear sees through Sally’s charade, and he’s furious. But he must admit she’s the best midshipman on board—and a woman who tempts him like no other. With his own secrets to hide and his career at stake, Col agrees to keep her on. But can the passion they hide survive the perils of a battle at sea? Soon, their love and devotion will be put to the test…

Damaris’ Review
I have to say this book intrigued me in every way possible. You might think it an older version of Mulan but it is in no way so. The story behind it called out to my attention in a quick second. I must say it was worth the purchase this book will be a keeper and I will recommended. It will keep you on your toes because you don’t quite know what it is to come. You know her intentions but it is not as easy to make out what is to come next. I will say the ending of it was not my favorite I wanted to see the interaction between Col and Sal’s family I wanted that and the very end needed a bit more…it felt to me as if she wanted to finish the book as soon as possible went it came to the last page or so. Over all I rate it a four start.

« Review: Shadow and Bone by Leigh Bardugo
Top Ten Books at the Top of My Spring TBR List »

One response to “Short Reviews: Vampire Academy Graphic Novel and Almost a Scandal”