Also by this author: You Know Me Well, The Twelve Days of Dash and Lily

Will Grayson meets Will Grayson. One cold night, in a most unlikely corner of Chicago, two strangers are about to cross paths. From that moment on, their world will collide and Iives intertwine.

It's not that far from Evanston to Naperville, but Chiacago suburbanites Will Grayson and Will Grayson might as well live on different planets. When fate delivers them both to the same surprising crossroads, the Will Graysons find their lives overlapping and hurtling in new and unexpected directions. With a push from friends new and old - including the massive, and massively fabulous, Tiny Cooper, offensive lineman and musical theater auteur extraordinaire - Will and Will begin building toward respective romantic turns-of-heart and the epic production of history's most awesome high school musical.

What a great book!  I don’t know why it took me this long to read Will Grayson, Will Grayson, but after seeing a few great reviews for the audio version lately, I decided to finally get it.

Let’s try to not confuse ourselves with the story.  There are two young men by the name of Will Grayson and I shall call them WG#1 (John Green’s Will) and WG#2 (David Levithan’s Will) to keep them straight in my mind.  The story is told in the first person, from their POVs, in alternating chapters. This is when I appreciated the two narrators the most.

“Also, I feel that crying is almost–like, aside from deaths of relatives or whatever– totally avoidable if you follow two very simple rules: 1.Don’t care too much. 2. Shut up. Everything unfortunate that has ever happened to me has stemmed from failure to follow one of the rules.”

WG#2 is meeting a guy that he’s corresponded with by IM for months.  When he arrives to the designated place for the meeting, he finds himself in a porn store.  I don’t want to spoil the book for you, but he has a despicable friend.  WG#2 is so dark.  He fights with depression and his view of the world is, well, dark.  He’s the type of person that sees the glass as half empty all the time.  Then he meets Tiny, which is the catalyst for him coming out of the closet, for him speaking to his mom, for him making new friends.

On to Tiny.  Tiny Cooper is a gigantic teenager, with a very loud personality, with a healthy love for music (and musicals), he’s gay and he wants to find love, he wants – no, needs – to be appreciated.  Tiny’s family is rich, understanding, and loving (we hear this rather than experience it). He was many friends, but he’s best friend is WG#1.   To be honest, Tiny is a big part of the story and you cannot help but love him.

“When things break, it’s not the actual breaking that prevents them from getting back together again. It’s because a little piece gets lost – the two remaining ends couldn’t fit together even if they wanted to. The whole shape has changed.”

Overall, Will Grayson, Will Grayson was a fantastic book about friendship, love, sexuality, music and much more. I can’t wait to read more about Tiny on Hold Me Closer: The Tiny Cooper Story. The audiobook was awesome!  It’s my first book from narrators MacLeod Andrews and Nick Podehl and I feel like they did a great job.  I don’t know who did which Will Grayson’s voice, but they were both really good.  The pacing was adequate, the voices were distinct from each other and easy to follow. 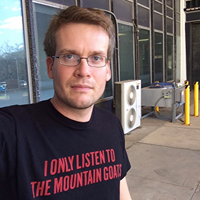 ohn Green is the New York Times bestselling author of Looking for Alaska, An Abundance of Katherines, Paper Towns, and The Fault in Our Stars. He is also the coauthor, with David Levithan, of Will Grayson, Will Grayson. He was 2006 recipient of the Michael L. Printz Award, a 2009 Edgar Award winner, and has twice been a finalist for the Los Angeles Times Book Prize. Green’s books have been published in more than a dozen languages.