Posted May 1, 2014 by ariannebookblogger in Reviews / 5 Comments What's Left of Me

I should not exist. But I do.

Eva and Addie started out the same way as everyone else—two souls woven together in one body, taking turns controlling their movements as they learned how to walk, how to sing, how to dance. But as they grew, so did the worried whispers. Why aren't they settling? Why isn't one of them fading? The doctors ran tests, the neighbors shied away, and their parents begged for more time.

Finally Addie was pronounced healthy and Eva was declared gone. Except she wasn't.

For the past three years, Eva has clung to the remnants of her life. Only Addie knows she's still there, trapped inside their body. Then one day, they discover there may be a way for Eva to move again. The risks are unimaginable—hybrids are considered a threat to society, so if they are caught, Addie and Eva will be locked away with the others. And yet . . . for a chance to smile, to speak, Eva will do anything.

What’s Left of Me is one of the most thematic and thought-provoking YA novels I’ve read in a long time.  So many YA dystopians are about the end of the world as we know it and nothing else; What’s Left of Me goes deeper than that.

What’s Left of Me is built on the premise of a parallel world where everyone is born with two souls, with one of them eventually submitting to the other and fading away. The heroines of this novel are a pair of twin souls named Addie and Eva. Addie is the dominant soul –  the one who talks, who moves, who breathes, who makes life choices – but Eva’s still there, valiantly trying to battle he way out in a world that believes she shouldn’t exist. She’s a hybrid, and we’re not talking about eco-friendly cars here. In the What’s Left of Me universe, she’s something to be hunted down, experimented upon or even killed. In a clever twist of storytelling, however, it’s Eva who is the main voice of this novel, and through her we experience all the fear, all the jealousy, all the sadness that’s characterised her limited existence. She longs to learn about the world and to see more of it, but trapped in a body that rarely feels like her own, she sees nothing but desolation in her future.

The relationship between Addie and Eva is something that I think should be talked about more: yes, it breaks your heart, but it also illustrates the innate humanity and the unbreakable bond they share. They disagree and they argue, they despair and they hope; they’re sisters but more than that they’re incomplete without each other. They rely on each other but it’s impossible for both of them to get what they want or even what they need; there are moments of complete self-sacrifice littered throughout this novel as both Eva and Addie struggle to allow each other to be happy. I thought I would never warm to Addie, but she proved me wrong; I was frustrated with her for at least half the book, but by the end I sympathised with her just as much as I did with Eva.

Unfortunately, the world-building outside the realm of the sisters’ thoughts was not so well-developed. We’re given a basic sketch of the alternative America the book’s set in but I wanted more detail, especially when it came to exactly why the government sees hybrids as such a threat.

Addie and I were born into the same body, our souls’ ghostly fingers entwined before we gasped our very first breath. Our earliest years together were also our happiest. Then came the worries – the tightness around our parents’ mouths, the frowns lining our kindergarten teacher’s forehead, the question everyone whispered when they thought we couldn’t hear.

Why aren’t they settling?

The plot isn’t as engaging as I’d hoped it would be, but for a short book, there’s certainly a lot of action packed in. The idea that two souls could be torn apart – similar to the relationship between humans and daemons in His Dark Materials – whether willingly or unwillingly takes prominence through much of the book, but there’s a little romance in there, too. If you’re looking for YA and dystopian novels where the romance is well done but not a melodramatic centrepiece or focal point, this book’s for you.

Personally, I felt there was still something missing – maybe it was the romance, maybe it was the world-building – from the heart of this book, so it never really found a way into mine, but it’s a highly original and thought-provoking read, so I’d definitely recommend it. 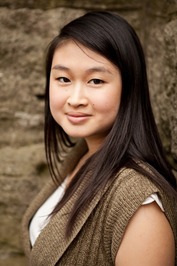 Kat Zhang spent most of her childhood tramping through a world weaved from her favorite stories and games. When she and her best friend weren’t riding magic horses or talking to trees, they were writing adaptations of plays for their stuffed animals (what would The Wizard of Oz have been like if the Cowardly Lion were replaced by a Loquacious Lamb?). By the age of twelve, Kat had started her first novel and begun plans for her life as a Real Live Author. Said plans didn’t come into fruition until seven years later when she wrote The Hybrid Chronicles, which sold to HarperCollins. When she is not exploring the world of her characters, she is exploring her own: she performs as a Spoken Word poet, contributes to Pub(lishing) Crawl, and ro date, she’s had the pleasure of visiting five countries, including more than half of the United States. She hopes to always keep writing and traveling and is represented by Emmanuelle Morgen of Stonesong.

« Review: Rebel Belle by Rachel Hawkins
Bookish Babble: How and why I started reading & new on the blog! »

5 responses to “Review: What’s Left of Me by Kat Zhang”