Between the Spark and the Burn

The crooked-smiling liar River West Redding, who drove into Violet's life one summer day and shook her world to pieces, is gone. Violet and Neely, River's other brother, are left to worry—until they catch a two a.m. radio program about strange events in a distant mountain town. They take off in search of River but are always a step behind, finding instead frenzied towns, witch hunts, and a wind-whipped island with the thrum of something strange and dangerous just under the surface. It isn't long before Violet begins to wonder if Neely, the one Redding brother she thought trustworthy, has been hiding a secret of his own . . .

When I read Between the Devil and the Deep Blue Sea, I had several issues with it (see my review here), some of these are still present in Between the Spark and the Burn.  However, I think two things contributed with me enjoying this book more. One, I listened to the first book in audio, and I think that didn’t do this book any favors; second, I ‘m more familiar now with Tucholke’s writing style and with the characters.

It must be said that the very best thing about this book is the writing.  It’s unusual and so very pretty, and lyrical.  It reminds me to Laini Taylor and Maggie Stiefvater, which are two of my favorite authors.  Please close attention to the quotes included here and you’ll see what I mean.

“I went to the kitchen, feeling my way down the dark hall.

The guesthouse kitchen was empty, no one, not a soul, no moka pot on the stove, no cups in the sink, no smell of coffee in the air, no tall boy in the shadows.”

Between the Spark and the Burn starts a few weeks after the ending of the previous book.  Violet and Neely are looking for River and Brody, in their own way.  They decided, together with Sunshine and Luke (Violet’s twin), to chase a rumor of strange happenings in Virginia.  After that, they separate and visit more places, expanding their search.  Another interesting fact is that Violet finds Freddie’s (her grandmother) diary, and we finally have more insight on her past and her relationship with Neely and River’s grandfather.  Let me just way that Freddie was wild.

Luke and Violet’s parents are so selfish and inattentive and that I still question the wisdom of them embarking in parenthood.  Jack still lives with them and is trying his hand and painting and adapting to his new life.  There are also new characters in this book that they meet on their adventure.  I never liked River and in this book, we get to meet Neely better and I like him a lot more than his brother. I think the characterization is really good and at the end they collect many new friends.

“And if I wished he was River, and if he wished I didn’t wish he as River, well, neither of us said anything because he was still warm, and I still cold, and both of use needed the comfort.  Neely-warmth started warming me up, finally, finally, and we both fell asleep wrapped up together with the wolves still lullaby-ing us in the background.”

This book is strange.  The gothic vive is clear and so is the feeling that something awful is waiting for you, just around the corner.  The plot is twisted, dark, and unexpected. I liked it! The ending, however, left me wanting for more, even though it gave me a pretty good idea of what the future holds.  As you might know, I really don’t like open endings.

“People like you don’t go mad, Vi. They’re quiet on the outside and loud on the inside and sane as the day is long.”

Overall, I liked Between the Spark and the Burn much better than the first book and it cemented my love for Tucholke’s writing.

About the cover: It’s a beautiful cover, very appropriate to the story.  The font, specially is very gothic. We also see the snow peaked mountain and an embracing couple. 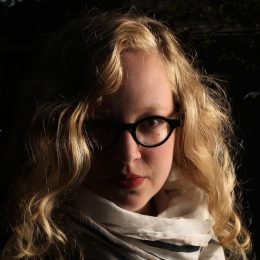 April Genevieve Tucholke is the author of Between the Devil and the Deep Blue Sea and its sequel, Between the Spark and the Burn. She loves classic horror movies and coffee. She has lived in many places, including Scotland, and currently resides in Oregon with her husband Nate Pedersen.

« What’s in Your Bookshelves?… Besides Books
Stacking The Shelves #62 & Weekly Recap »

4 responses to “Review: Between the Spark and the Burn by April Genevieve Tucholke”