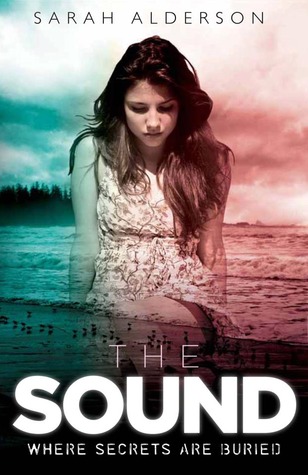 A gripping  thriller from a talented new author, The Sound tells the story of aspiring music journalist Ren Kingston and the summer she spends on the glamorous, wealthy island of Nantucket.

The island may be the playground for Boston’s elite, but Ren's hoping for a low-key summer reading books and blogging about bands. Boys are firmly off the agenda. What she doesn’t count on is falling in with a bunch of party-loving private school kids who are hiding some dark secrets; falling (possibly) in love with the local bad boy; and falling out with a dangerous serial killer.

This was my first Sarah Alderson book, and right away I could tell she has enormous talent for dark, contemporary YA. She can write humour and bring light relief, but she can also masterfully manipulate tension and suspicion. If nothing else, The Sound is very engaging – it was maybe even a little too sinister for my taste, but as a piece of fiction, it works really well.

The Sound’s heroine is a British girl named Ren. She’s taken a summer job as a nanny notto endear herself to the hordes of Nantucket elite, but to escape a break-up and earn enough money to move on to her dream career in music and journalism. Ren is a charactera lot of readers will identify with. She’s down-to-earth, she has normal problems and she’s easy to like, but she’s also sarcastic, funny and passionate. In a world where thriller heroines are ‘dumbed down’ so that the complexity of the story overshadows the complexity of human personality, Ren stands out from the crowd.

Jesse is, of course, the bad boy love interest. I didn’t think I was going to like him much at first, but he definitely grows on the reader. Ren sees something in him that others don’t, gtiving us a chance to see different sides of him throughout the novel. But fictional life is never that simple, and Ren finds herself attracted to sweet, rich frat boy Jeremy, too. Love triangles can make or break a book for me, but this one was well-written and although I had a clear favourite, I can’t imagine the book without it.

And the characters involved in the triangle are vastly preferable to some of the secondary characters who fill out the rest of The Sound’s cast. Whether you love them or hate them, they will force a strong reaction out of you. Parker, Tyler, Sophie, Summer, Paige, Matt and Eliza are all rich kids, and many fo them have rich kid manners (or lack of them) to boot. What they’re really useful for, however, is helping to cast doubt on what we think we know about The Sound’s plot – because this is, after all, a thriller.

The book begins with a bang and it doesn’t let up afterwards, either. I was absorbed within a few pages, and from there, I knew I was onto a good thing. Even if you’re not a thriller or mystery fan, it’s impossible not to try and guess who’s keeping secrets and who might be to blame. It may be cliché to say that everyone’s a suspect, but with so many wtists and turns, it’s the perfect way to sum up the mysteries of The Sound. There’s plenty of action too, and it ratchets up a notch or four as the drama unfolds, so if you can stick with it, you’ll be both terrified and enthralled by the oncoming conclusion.

I did feel that some parts of the book were a little try-hard – it’s all very hipster, very insert-random-pop-culture-reference-here. Ren’s narration leaves a lot to be desired, not least because of her descriptions but also because, while I found it hilarious that she mocks Twilight once or twice, when she continues to use it as a tool to describe her situation (from arguing that she’s the opposite of Bella Swan, to comparing her love interest to ‘Edward Cullen spliced with Buzz Lightyear’) it becomes an old and tired trope – fast. There’s also frequent slut-shaming, which I did not apprieciate. I get that Alderson wanted to write a memorable book, but in many ways, The Sound is memorable for all the wrong reasons.

In short: The Sound has a thrilling plot and lots of potential, but is let down by stereotypes, slut-shaming and an unsavoury writing style. There are, however, some characters you’ll really fall in love with, and it’s also a standalone, which could make it ideal as a refreshing summer read.

Having spent most of her life in London, Sarah quit her job in the non-profit sector in 2009 and took off on a round the world trip with her husband and princess-obsessed daughter on a mission to find a new place to call home. After several months in India, Singapore, Australia and the US, they settled in Bali where Sarah now spends her days writing by the pool and trying to machete open coconuts without severing a limb.

She finished her first novel, Hunting Lila, just before they left the UK, wrote the sequel on the beach in India and had signed a two book deal with Simon & Schuster by the time they had reached Bali. A third book, Fated, about a teenage demon slayer, was published in January 2012. The Sound, a thriller romance set in Nantucket, was published in August 2013.

She has a further three thrillers due for release in the next few years.

One response to “Review: The Sound by Sarah Alderson”