There’s nothing real about reality TV.Seventeen-year-old Bonnie™ Baker has grown up on TV—she and her twelve siblings are the stars of one-time hit reality show Baker’s Dozen. Since the show’s cancellation and the scandal surrounding it, Bonnie™ has tried to live a normal life, under the radar and out of the spotlight. But it’s about to fall apart…because Baker’s Dozen is going back on the air. Bonnie™’s mom and the show’s producers won’t let her quit and soon the life she has so carefully built for herself, with real friends (and maybe even a real boyfriend), is in danger of being destroyed by the show. Bonnie™ needs to do something drastic if her life is ever going to be her own—even if it means being more exposed than ever before.

Right off the bat, in an attempt to avoid confusion, I want to clarify that Bonnie Baker and Chloe Baker are the same person. Bonnie is essentially a brand that millions of households fell in love with during the course of the television show, Baker’s Dozen, while Chloe is the aftermath of Bonnie; Chloe is free from a stage-directed life but she still has the scars of her past. I will refer to her as Chloe from this point on.

Also, this is quite a long review so buckle up and enjoy.

The first thing that I noticed about this novel was that the book was divided into seasons and episodes instead of chapters. Her life isn’t measured in years, it’s measured in seasons. This was normal for her and her family though; there were many instances when Chloe would remember an event and instead of referencing the year or her age, she would reference the season. Since the show started at her birth, we pick up during her seventeenth “season”, four years after the show was off-air. She still has her scars from her past, the panic attacks that lurk in the back of her mind, her paranoia, and the “scandal” that ended the show. Throughout the novel, we get to see how they have affected her and how she handles them when situations arise.

I loved Chloe because she was an imperfect teenager being imperfect; she didn’t always handle all situations that arose with grace or even dignity but she was real. Benton, or Benny as all of the people who really knew him called him, is Chloe’s brother and he is amazing. He is unwavering, even when he thinks she is overreacting or being ridiculous, he is still there, her constant. I love Benny.

Patrick Sheldon. I could write this entire review over Patrick Sheldon and still not be satisfied. Patrick is the snarky guy who sits in the back of the classroom; he’s intelligent, well-read, and all around an awesome guy. I know that most people would choose Four as their fictional crush but not me, Patrick Sheldon is it for me. He asked her what her three favorite words were, what, that’s attractive. He singlehandedly made the word “excellent” the sexiest word in all of the human language. I love him, if you can’t tell.

I will try to move on from my love of Patrick Sheldon. This book focused on reality versus appearance; the Baker family appeared to have it all but they were really broken. Instead of actually talking and connecting, they were forced to have any “real” conversations on camera which caused a fracture to begin with Chloe and her mom. Once all the cameras moved in, her house was no longer a home but rather a set for a television show. Chloe struggled with feeling like she belonged because so much of her life was spent cramming herself into the mold that someone else made for her.

This book had a lot of hard hitting points which I loved! It gave it purpose and a message to get across which I love in a book, young adult or adult. I felt the story had three main messages; the first being that we as a society need to think about our obsession with shows like these. John and Kate plus Eight went through a similar situation as this family and this book really made me think about how hard it must have been. We think that we can candidly judge these people but we don’t see what’s going on behind the scenes. The second message was that teenagers matter. Chloe asks “Why do people think its okay to chalk everything up to hormones? As if they’re less real or something.” I love this quote because it pinpoints the issue, teenagers aren’t less real or inferior, and they have real emotions and problems. [A rant is about to happen, sorry, I easily get ranty.] I have always had a pet peeve about this, people just writing you off because you’re young or a woman. When I was in high school, I was taking five of my guy friends back to school and one of them broke my door. Yep, they broke my door. The inside just fell right off. I start yelling, naturally, I mean, they broke my door. Then, one of my idiot friends has the audacity to ask if it’s my time of the month, as if the only explanation for my anger is bleeding. People tend to write other people off but it isn’t that simple, they need to open their eyes and see. [End rant.] Last message: fame isn’t all that it’s cracked up to be. “The whole country is sick. Sick with this idea that it’s good to be known and seen by as many people as possible, to show every part of our lives to the public at large. Whether its Facebook photos, blogs, or reality TV, it’s like nobody is content to just live.” AMEN.

In the book, Chloe and her classmates are reading George Orwell’s 1984 and I love the comparisons to her own life that she makes throughout the book. She comes to her own by reading this and realizing that this is not what she wants and she needs to stand up to “the man” or in her case, MetaReel. Amen sister. The only thing that I didn’t really like about this book was that there were live 24/7 feeds. I watch Big Brother and I get it for that but for a family show….. It wasn’t super plausible but I understood why Heather put it in there.

To conclude, Chloe has spent her entire life looking for somewhere to belong, something real (wink) that she could trust in and I love that we get to join her on her journey. It’s a really great book and I think that y’all should definitely read it. Five stars. 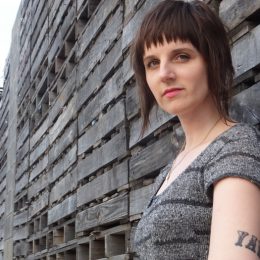 3 responses to “Review: Something Real by Heather Demetrios”