Also by this author: Meant to Be

Meet Sloane Emily Jacobs: a seriously stressed-out figure-skater from Washington, D.C., who choked during junior nationals and isn’t sure she’s ready for a comeback. What she does know is that she’d give anything to escape the mass of misery that is her life.

Now meet Sloane Devon Jacobs, a spunky ice hockey player from Philly who’s been suspended from her team for too many aggressive hip checks. Her punishment? Hockey camp, now, when she’s playing the worst she’s ever played. If she messes up? Her life will be over.

When the two Sloanes meet by chance in Montreal and decide to trade places for the summer, each girl thinks she’s the lucky one: no strangers to judge or laugh at Sloane Emily, no scouts expecting Sloane Devon to be a hero. But it didn’t occur to Sloane E. that while avoiding sequins and axels she might meet a hockey hottie—and Sloane D. never expected to run into a familiar (and very good-looking) face from home. It’s not long before the Sloanes discover that convincing people you’re someone else might be more difficult than being yourself.

Being Sloane Jacobs is another cute book from Lauren Morrill with another cute cover! There were a lot of things that I liked about BSJ but I would have to say that my favorite aspect is Lauren Morrill’s writing style; there are many similarities between her two novels and it connected the two books and allowed them to exist in the same world. It had all of the things that I fell in love with in her first novel but with a completely new story. I can’t lie, I didn’t like this book nearly as much as Meant to Be but I loved it nonetheless. Moving on, I really liked both Sloane Emily and Sloane Devon (they distinguished themselves that way); Sloane Emily was an ice skater whose father is famous which makes her known while Sloane Devon is a hockey player with a mom in rehab and a father trying to keep them afloat. They switch lives and find out that the grass isn’t always greener on the other side. I loved their friendship and I loved how much they each grew throughout the story; it was a really fun journey that I’m glad that I took. It was hard to distinguish the two when they were having conversations together but I understand that’s just hard all around.

The romances were both very… Disney movie like? I love Disney movies so this wasn’t a problem for me though I do like more developed relationships. Matt plays hockey and he’s arrogant which caught my attention while Ferdinand kind of bored me…

I’m really glad that I got to read this book and I can’t wait until her newest book comes out! I adore Lauren Morrill and she is an auto-buy author for me! 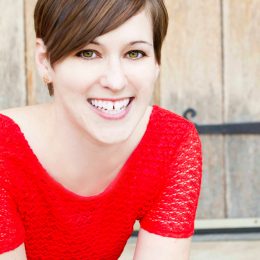 Lauren Elizabeth Morrill is many things, including, but not limited to, a writer, an educator, a badass roller derby skater, a former band nerd, an aggressive driver, and a die-hard Mac person. She also watches a lot of TV, eats a lot of junk food, and drinks a lot of Coke. It’s a wonder her brain and teeth haven’t rotted out of her head.

Her first novel, Meant to Be, sold in a two-book deal to Wendy Loggia at Delacorte for Paper Lantern Lit.

« From Page to Screen: One Piece
ARC Review: When by Victoria Laurie »

6 responses to “Review: Being Sloane Jacobs by Lauren Morrill”