Will Scarlet is good at two things: stealing from the rich and keeping secrets - skills that are in high demand in Robin Hood's band of thieves, who protect the people of Nottingham from the evil sheriff. Scarlet's biggest secret of all is one only Robin and his men know...that she is posing as a thief; that the slip of a boy who is fast with sharp knives is really a girl.

The terrible events in her past that led Scarlet to hide her real identity are in danger of being exposed when the thief taker Lord Gisbourne arrives in town to rid Nottingham of the Hood and his men once and for all. As Gisbourne closes in a put innocent lives at risk, Scarlet must decide how much the people of Nottingham mean to her, especially John Little, a flirtatious fellow outlaw, and Robin, whose quick smiles have the rare power to unsettle her. There is real honor among these thieves and so much more - making this a fight worth dying for.

Scarlet was a bit of a surprise for me; I planned on reading it eventually but once they announced that she would be on tour with Emery Lord in Dallas, I moved it to the top of my TBR.

Hype. The reason that I wasn’t too keen on getting to it was because of the insane hype surrounding it right now, especially since the third one just came out. I decided to push through and I readied myself to love it and then…. Scarlet, our MC, entered the picture. It was not love at first page with Scarlet, she talks… so unintelligent. Now, I understand that it’s a different time but every other character talked fine but we were stuck in the one character’s head that didn’t. It didn’t look good from there; I was out of town and I didn’t miss it and the love triangle was giving me a headache, I was kind of over it until…

IT BECAME FREAKING WONDERFUL. Please note, it became freaking wonderful about 75% of the way through. Now, how does only a fourth of a good book justify five stars? BECAUSE EVERYTHING MAKES SENSE NOW. Literally, I’m tempted to reread this right away because she made everything tie into together and now nothing bothers me. NOTHING. NOT EVEN THE SPEECH BECAUSE IT ALL MAKES SENSE. It all has a purpose. A purpose that I was completely in the dark about. IT WAS FREAKING AMAZING.

Okay, enough raving. Scarlet is a retelling of the story of Robin Hood with a bit of a twist, one Mr. Will Scarlet just so happens to be a woman. It was a really fun and clever take on the story of Robin Hood. I’m still freaking out about how great this was. Rob is twenty-one, Scar is eighteen as is John, and I think Much is seventeen which gave the story depth, I loved that they were older and had a different view on the world.

Basically my heart stopped a few times because the swoons were so swoony. Some men have a way with words.

I give it a stamp of approval but don’t give up if the beginning doesn’t hook you, it gets great.

About A. C. Gaughen 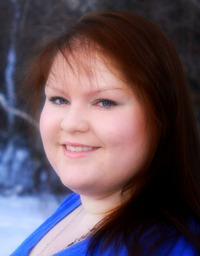 I am shamelessly addicted to staying up far too late (it feels like stealing time), diet coke (it burns so good), Scotland (stupid country stole my heart and won’t give it back. Interpol has been ineffective for prosecution) and thieves (so I guess I’m not that mad at Scotland).

One response to “Review: Scarlet by A. C. Gaughen”