The Queen of Kentucky

Fourteen-year-old Kentucky girl Ricki Jo Winstead, who would prefer to be called Ericka, thank you very much, is eager to shed her farmer's daughter roots and become part of the popular crowd at her small town high school. She trades her Bible for Seventeen magazine, buys new "sophisticated" clothes and somehow manages to secure a tenuous spot at the cool kids table. She's on top of the world, even though her best friend and the boy next door Luke says he misses "plain old Ricki Jo."Caught between being a country girl and wannabe country club girl, Ricki Jo begins to forget who she truly is: someone who doesn't care what people think and who wouldn't let a good-looking guy walk all over her. It takes a serious incident out on Luke's farm for Ricki Jo to realize that being a true friend is more important than being popular.

I don’t usually read books about characters under the age of 16 because they don’t tend to jive with me but I gave this book a shot for two reasons:

1. I REALLY want to read Alecia Whitaker’s second/new novel, Wildflower, and I like to read an author’s work chronologically when I have the opportunity, thus prompting me to choose The Queen of Kentucky. I don’t know if anyone else does this but I enjoy seeing how authors change/stay the same from book to book.

2. I recently read Jen Calonita’s Summer State of Mind (which is a sequel to Sleepaway Girls) and I LOVED it; I was super skeptical at first because it was about a fifteen year old girl but it ended up being my favorite Jen Calonita book (and I LOVE Jen Calonita). This great experience with a book about a younger MC propelled me towards giving this book a shot.

This book has been at the top of my TBR list for the past few months because of these two reasons but this book just didn’t work for it; I tried so hard to like it and forgive the problems I had a first but they just kept snowballing until I really just didn’t like the book. It bums me out and I really wish that I felt differently.

Ricki Jo is convinced that she is a hick because she lives twenty minutes outside of town, while all of the “cool kids” live in town and hang out at the country club. She decides that she wants to make a name for herself at her new high school (she went to a catholic school for K-8) and be “cool”. Oh the elusive “cool” factor that is sought out in high school. This book had a way of connecting with people because whether you were cool, weren’t cool, desperately wanted to be cool, or didn’t care, we all understand the concept and appeal of being cool.

One the first day of cool, I mean school (hehe), Ricki Jo (who goes by Ericka in high school, I’ll still refer to her as Ricki Jo or RJ) meets the Fab Four, four beautiful and popular girls she strives to fit in with and Wolf, the stud of the town. RJ changes her clothes, her attitude, and even her interests in order to fit in with these “cool” kids. One thing that annoyed me was that she already had friends, it wasn’t like she was completely new, her best friend Luke attended that school and some other nice people she met previously went there but they apparently weren’t good enough; she viewed her changes as an upgrade and I guess it only made sense for her to upgrade her friends too, besides Luke.

Luke. Let’s talk about that boy; Luke is the only redeeming part of this entire book. I love Luke; he’s just a good ol’ country boy with a huge heart. His story is actually what kept me reading the book; he has real struggles and real emotions which was so refreshing to the story. RJ spent the entire book freaking out about boys and clothes while her best friend was dealing with an abusive father and raw grief. His story was beautiful to see unfold, his emotions and thoughts were so uniquely complex that it broke my heart.

Moving on to RJ: the main character who I couldn’t relate with, she is crazy selfish and she never puts anyone else before herself. I understand that being fourteen and starting high school is tough but she never saw past her own self. There were even times when she almost put herself above Luke but then she snapped out of it. I think that Luke was in the story to help RJ learn about others and not focus only on herself.

Other characters: Her supposed friends were terrible! I wanted to shake sense into her the entire book because she didn’t seem to value herself enough to realize that she is awesome and needs to be appreciated. She kept letting these crappy people use her and it went on for the entire book, almost four hundred pages. I got incredibly frustrated with it.

Good things: It was fun to learn more about Kentucky and I genuinely felt connected to the country and the way of life out there. I went to school in the country and I enjoyed really understanding their way of life and how growing up there really is.

Alecia did capture the spirit of freshman year in high school, there’s an excitement and innocence to it which RJ really embraced it and I loved. I also (somewhat) enjoyed how overly dramatic RJ was because it’s true, high school is all about the instant exaggerations: best friends forever (whom you just met) and the love of your life.

The main thing that I got from this book was the debate of losing yourself to fit in versus staying true to who you are and coincidentally not being popular.

I might have felt differently about this book if I read it as a freshman in high school but as a twenty-two year old, I just couldn’t get behind this book. I am still planning on reading Wildflower (which is about a seventeen year old) and I’m still excited about it. 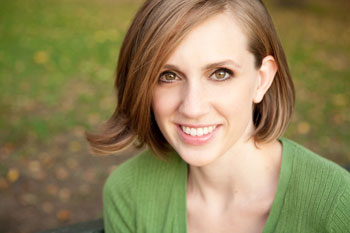 Alecia Whitaker grew up with a big imagination on a small farm in Kentucky, which was worlds away from where she currently resides in fast-paced New York City. She knows more about cows, tobacco, frog gigging, and carpentry than the average girl, and she applies the work ethic and common sense she learned from her southern upbringing to the way she now navigates her career and family life in the big city.

Although she graduated from the University of Kentucky with a BFA in Theatre and a BS in Advertising, she’s always been a writer. She won the Soil Conservation Essay contest in the 4th grade, was selected as a Governor’s School for the Arts student in Creative Writing in the 10th grade, and then in college, she was a Top Ten Finalist in the US Southeast Region for a Ten Minute Playwriting competition at James Madison University.

Since then, she has been in loads of commercials, as well as on stage in a few small theatrical productions and poetry slams. She appeared on The Ellen DeGeneres Show numerous times, The Big Idea with Donny Deutsch, and was a contestant on Deal Or No Deal. She is currently the host of a twice weekly web show called The Baby Book, which chronicles her real life experiences of being a mom in New York City.

Her personal essays have been published in the anthology Blink: Fiction in the Blink of an Eye and several times in Underwired Magazine. She co-wrote the popular one act play Becoming Woman with a grant from The Kentucky Foundation for Women. The Queen of Kentucky is her first novel and proudest artistic accomplishment.

Now living in New York City with her husband and son, she is amused at how often her big imagination takes her back to a simpler life in Kentucky

One response to “Review: The Queen of Kentucky by Alecia Whitaker”