Also by this author: Let's Get Lost

Never date your best friend Always be original Sometimes rules are meant to be broken Best friends Dave and Julia were determined to never be cliché high school kids—the ones who sit at the same lunch table every day, dissecting the drama from homeroom and plotting their campaigns for prom king and queen. They even wrote their own Never List of everything they vowed they'd never, ever do in high school. Some of the rules have been easy to follow, like #5, never die your hair a color of the rainbow, or #7, never hook up with a teacher. But Dave has a secret: he's broken rule #8, never pine silently after someone for the entirety of high school. It's either that or break rule #10, never date your best friend. Dave has loved Julia for as long as he can remember. Julia is beautiful, wild and impetuous. So when she suggests they do every Never on the list, Dave is happy to play along. He even dyes his hair an unfortunate shade of green. It starts as a joke, but then a funny thing happens: Dave and Julia discover that by skipping the clichés, they've actually been missing out on high school. And maybe even on love.

Never Always Sometimes is a special story.  It’s a story of friendship, love, nevers, firsts, lasts, maybes and forevers.  I think that the best worked to describe it is bittersweet.

The story is so wonderful that in a way, it makes it harder for me to talk about it, especially without spoiling it.  I’m a big fan of Alsaid’s Let’s Get Lost, and although I liked and enjoyed Never Always Sometimes, it lacked some of the magic of his first book.

This is the story of two best friends that create a list of Nevers the day before starting high school. This list contains clichés that they want to avoid to remain original and true to themselves.  As seniors, Dave finds the list and they decide to do all the clichés. As they embark in this adventure they find that by avoiding them, they’d missed out on a lot of other experiences.

Dave and Juia’s friendship is SO amazing.  They find comfort in each other and they rely on each other for everything.  Their dialogues and their time together are precious and they were my favorite part of the book.  Being so comfortable with other human being, being of a same mind and predict each other’s words and behaviors was so amazing to read.

Dave is sweet, and the calming force behind Julia’s hurricane like personality. They balance each other perfectly.  On the other hand, Julia is crazy!  She’s impulsive and never thinks of consequences to her actions.

“As long as we don’t get turned into something that looks more like high school, more like everybody else and less like us, I’ll be okay.”

The writing is very good and a pleasure to read. It’s enthralling and kept me reading page after page.  The pace is a bit slow at times.  The plot, the story was unexpected to me.  I’m not even sure what to say here without spoiling it for you, but the heartbreak was real and it made me cry. Oh, the feels were real!

I hope the best for Julia and Dave and that their friendship can mend with time.  Can we have a short story of what happened after?  Pretty please 🙂

“If you wanted Dave to be prom king, you should have tried talking to other people for the last four years. People vote their friends onto the ballot, so the people with the most friends get on.  Dave has one friend.”

“But she’s such a great friend!” Julia cried out.”

Overall, Never Always Sometimes is a wonderful and bittersweet story.  As tory that I really enjoyed, even as I wished for a different ending.  I’m looking forward to Alsaid’s next book 😉 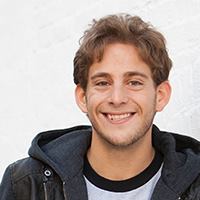