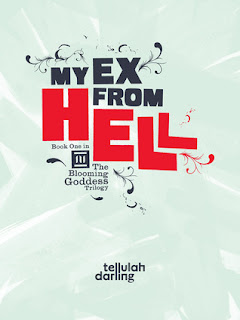 Sixteen-year-old Sophie Bloom wishes she’d been taught the following: a) Bad boy’s presence (TrOuBlE) + teen girl’s brain (DraMa) = TrAuMa (Highly unstable and very volatile.)b) The Genus Greekulum Godissimus is notable for three traits: 1) awesome abilities, 2) grudges, and 3) hook-ups, break-ups, and in-fighting that puts cable to shame. Prior to the Halloween dance, Sophie figures her worst problems involve adolescent theatrics, bitchy yoga girls, and being on probation at her boarding school for mouthy behaviour. Then she meets bad boy Kai and gets the kiss that rocks her world. Literally. This breath stealing lip lock reawakens Sophie’s true identity: Persephone, Goddess of Spring. She’s key to saving humanity in the war between the Underworld and Olympus, target numero uno of Hades and Zeus, and totally screwed. Plus there’s also the little issue that Sophie’s last memory as Persephone was just before someone tried to murder her. Big picture: master her powers, get her memories back, defeat Persephone’s would be assassin, and save the world. Also, sneak into the Underworld to retrieve stolen property, battle the minions of Hades and Zeus, outwit psycho nymphs, slay a dragon, rescue a classmate, keep from getting her butt expelled from the one place designed to keep her safe … … and stop kissing Kai, Prince of the Underworld. My Ex From Hell is a romantic comedy/Greek mythology smackdown. Romeo and Juliet had it easy.

My Review
It’s no secret that I LOVE mythology and Greek myths are my favorite.  My Ex From Hell was a really great take on the Persephone story and it is SO FUNNY!
How can I describe the plot without giving it away?  As always, I’ll strive to do my best!  Sophie is 16 and in reality is Persephone in human form.  She is human because of something that happened in the Underworld that she can’t remember (and reasons better left to your own discovery).  Sophie has two best friends: Hannah, a gorgeous geek and Theo.  As you can read in the description, when Kai comes into the picture and kisses her it unlocks some of her memories, but unfortunately not all of them.  What happens next is a type of quest in search for some missing students and for Sophie’s memories.
The characterization is amazing!  We have Sophie, which is full of flaws, but very feisty and funny.  Hannah is beautiful, but really smart and a loyal friend.  Theo is (gay?) and a bit more than a good friend.  Kai is breathtaking!  Oh, and let’s not forget the bully and ever popular girl, Bethany.
As I said, the story is a modern take on the myth of Persephone, and in this case, Kai is Hades’ son.  The couple finds themselves in the middle of a power struggle between the gods (this happens often in mythology, right?).  The book is fairly short and fast paced.  As Sophie doesn’t have all her memories, we get to experience everything from her point of view.  I really enjoyed the writing.  It is hilarious!  It’s full of modern references, technology, snark, slang and such.  However, the ending was a total cliffhanger, and I’m not a fan of that.  Thank goodness that My Date From Hell, book #2, is due to be published in
October.
My Ex From Hellis a must for mythology fans, especially if you love the tale of Persephone and Hades (er, like I do!).
Some quotes for you (note these are from the ARC):
“The name is Kai”. He corrected.
How to put this without sounding stupid? Aw, screw it. There is no way. His voice made me tingle and shiver and warmed me in placed that definitely should not have been warm at the moment. … Kai’s voice was dark and lazy and slightly foreign and…whoa baby, I’m getting weak just thinking about it.”
“Hannah was staring wide-eyed at the two of us. “Mommy, daddy, please don’t fight”.
“Stay”, he ordered me. [Theo]
“I’m not a dog,” I shot back at him.
“Too bad for me,” he muttered and staked out.
I glanced at Hannah. “Did I miss something at the dance? Who peed in his cornflakes?”
“How did she end up here? This sudden epidemic of Greek figures in teen bodies is a little to Invasion of the Body Snatchers for me” – Hannah
About the cover:  Not really my cup of tea.

2 responses to “Review: My Ex From Hell by Tallulah Darling (The Blooming Goddess Trilogy #1)”