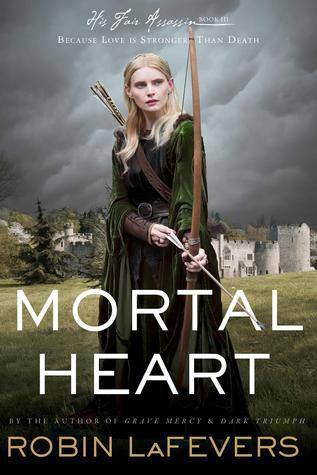 Annith has watched her gifted sisters at the convent come and go, carrying out their dark dealings in the name of St. Mortain, patiently awaiting her own turn to serve Death. But her worst fears are realized when she discovers she is being groomed by the abbess as a Seeress, to be forever sequestered in the rock and stone womb of the convent. Feeling sorely betrayed, Annith decides to strike out on her own.

She has spent her whole life training to be an assassin. Just because the convent has changed its mind doesn't mean she has...

His Fair Assassin has been an amazing series that started with Grave Mercy and Dark Triumph.  Obviously, I was so ready to read Mortal Heart and the ending of the series did not disappoint at all.  Quite the contrary, it was incredibly good.

I was dying to get to know Annith better.  During the two previous books we get to see her for a little bit and we also get to see Ismae and Sybella’s recollections of her, but is just enough to incite curiosity.  Annith’s story start a few weeks after Ismae is send to the duchess’ court with Duval and eventually all three assassins meet there.  Her story was full of heartbreak, abuse, lies, deceit, and betrayal.  But don’t despair dear reader, her story is also full of self-discovery, growth, friendship, and love.  Annith embarks in a trip by herself and makes a few friends (more about that below.)

How can I describe Balthazaar and still make him justice?  He is a very complicated character that had lost faith in humanity and in ever finding a reason for living.  Annith became his beacon of light in a world full of darkness.  I know that sounds corny, but sadly, I cannot say much about Balthazaar because it will be too spoilery.  Let me just say that I love their relationship and the way that he protected Annith and put her needs before his own.

It was so nice that Ismae, Sybella, Duval, Beast, the Duchess and other characters in the series are present here too.  I’m glad to see them happy and see how they have adapted to the life outside of the convent and beyond the clutches of the abbess. We also get to meet two more groups of people. The hallequin, are men that have committed crimes and enter into the service of Mortain in order to aspire for redemption.  Their purpose is to guide lost and reluctant souls to their final resting place.  The other group are the Arduinnites, which are the follower of the goddess and are really good archers.  They are both of great support to Britain and to Annith.

The writing is so good.  Even though this book is big (464 pages), I feel like every word was needed to tell the story.  The story itself, the plot, is heavy with politics and war tactics; it’s intricate and riddled with surprises.  As you might know if you read the previous books, the story is based in the actual story or Britain in the 1400s and in old beliefs in pagan gods.  It’s a mix of historical-fiction-paranormal-mythology; I hope that makes sense. The books are heavy on religion, after all our fair assassins were trained in a convent that serves Saint Mortain (the god of death), but they are not preachy.

It is hard to say which book is better because each of them is unique and stands by their own merits.  I’m tempted to say that Mortal Heart might be my favorite.

Overall, Mortal Heart is an incredible ending to a series that I’m very sad to see come to an end, but extremely satisfied with.  Outstanding. 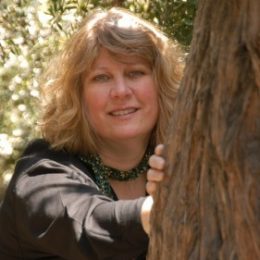 Robin LaFevers was raised on a steady diet of fairy tales, Bulfinch’s mythology, and 19th century poetry. It is not surprising she grew up to be a hopeless romantic.

Though she has never trained as an assassin or joined a convent, she did attend Catholic school for three years, which instilled in her a deep fascination with sacred rituals and the concept of the Divine. She has been on a search for answers to life’s mysteries ever since.

While many of those answers still elude her, she was lucky enough to find her one true love, and is living happily ever after with him in the foothills of southern California.

In addition to writing about teen assassin nuns in medieval Brittany, she writes books for middle grade readers, including the Theodosia books and the Nathaniel Fludd, Beastologist series.