Bestselling author of the Wicked Lovely books Melissa Marr’s first contemporary YA novel is a twisted southern gothic tale of obsession, romance, and murder. A killer is obsessed with Eva Tilling. Can she stop him, or will he claim her?When Eva Tilling wakes up in the hospital, she’s confused—who in her sleepy little North Carolina town could have hit her with their car? And why? But before she can consider the question, she finds that she’s awoken with a strange new skill: the ability to foresee people’s deaths when they touch her. While she is recovering from the hit-and-run, Nate, an old flame, reappears, and the two must traverse their rocky past as they figure out how to use Eva’s power to keep her friends—and themselves—alive. But while Eva and Nate grow closer, the killer grows increasingly frantic in his attempt to get to Eva.For the first time, New York Times bestselling author Melissa Marr has applied her extraordinary talent to contemporary realism. Chilling twists, unrequited obsession, and high-stakes romance drive this Gothic, racy thriller—a story of small-town oppression and salvation. Melissa’s fans, and every YA reader, will find its wild ride enthralling.

I’m not sure what I was expecting, but Made for You was a pleasant surprise and right up my alley.  I have to confess that I only read the first two books of the Wicked Lovely series and then stop midway on the third book.  Needless to say, it was not my cup of tea.

Made for You is in essence a mystery-murder story.  Once upon a time a read a lot of stories like this one, thrillers that left me breathless in their intrigue.  I think this is why I liked Made for You so much.  One of the things that I appreciate a lot are the plot twists.  Marr reveals enough information to keep you guessing, and when you thing you know where the story is going, she changes courses.  It was brilliant!

Eva and Nate’s relationship is believable because they knew each other (even went to the same school) and were childhood friends.  Everything changed when Nate’s parents got divorced and he started acting up.  They “find” each other again in the hospital, right after Eva’s “accident”.  Eva wakes up with a new (and disturbingly inconvenient) ability. I like that after the accident Eva decides that life is too short to keep feelings bottled up and she resolves to be brutally honest.

“Even so, what would they do if I walked up to you? Baucom, Piper, and the rest of them?  Sober and at a party or at school?”

“Well, we’re talking now”, I finally say.  “Are you going to ignore me later?”

“No.” He rubs his hand over his head, just like he used to when we were kids.

“You still pet your head when you’re nervous, Nate.”

Nate was so sweet.  He was misguided, but I’m happy that he came to his senses.  He really cares for Eva – never stopped doing so – even is now Eva has scars and other issues.  Their relationship was so cute.

I really enjoyed most of the characters in the book.  You can see how good Eva’s parents tried to become.  The friendship between Eva and Grace was sound and true; they really loved one another and were there for each other for the good and the bad.  Eva has other friends, but Piper and Grace are the closest her.  The murderer labeled himself to the “Judge” and the chapters from his point a view were harder to read, as they are full of his twisted logic.  He is nasty and as crazy as they come.

“Judge. It’s not the name I was born with but it’s my true name, my soul name.  I’m not really an executioner yet, and without Eva, I’m not a jury.  Together, we could be a judge, jury, and executioner.”

The setting is the small southern town of Jessup where it seems like time stopped and money and social status talk.   The story is told in the first person, from different points of view, mostly Eva, Grace and Judge.  I liked that we were able to know what was going on with other characters.  The writing is easy to read and fascinating. I love the dialogue and banter between the characters too.

Overall, I really liked Made for You. It’s a book about obsession, delusion, murder, mystery, but also about friendship, love and change.

About the cover:  It’s creepy, but not overly so.  The cicada in the box has significance after you read the book, and so do the flower petals floating around.  I also like how the letters in the title are uneven, as if they were unstable.

1 winner will receive a full set of the 5 Wicked Lovely series and the Wicked Lovely companion book (all paperback) as well as a hardcover copy of Made For You. US Only

1 winner will receive a paperback of Graveminder & of Arrivals, as well as a hardcover copy of Made For You. US Only.

1 winner will receive a hardcover of Made For You.US ONLY.
a Rafflecopter giveaway 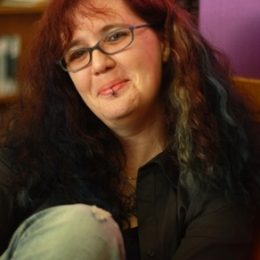 Melissa grew up believing in faeries, ghosts, and various other creatures. After teaching college lit for a decade, she applied her fascination with folklore to writing.
Melissa writes fiction for adults, teens, and children. Her books have been translated into 28 languages to date and been bestsellers in the US (NY Times, LA Times, USA Today, Wall Street Journal) as well as various countries overseas. She is best known for the Wicked Lovely series for teens and Graveminder for adults.

Wicked Lovely was her first novel; it was simultaneously released in the US and UK by HarperCollins in 2007 (with translation rights also sold in twenty-some countries). It debuted as a NY Times Bestseller and evolved into a multi-book series with myriad accolades and international bestseller lists.
Her debut adult book, Graveminder, released to strong critical reception in 2011. Following that she has edited anthologies with Kelley Armstrong (Enthralled and Shards & Ashes) and with her friend Tim Pratt (Rags & Bones), and released a second adult novel (The Arrivals) in 2013.
With Kelley Armstrong, Melissa is the co-author of the Blackwell Pages trilogy (Little, Brown Books for Young Readers), a children’s series about the Norse myth of Ragnarök.
Her upcoming HarperCollins 2014 release, Made For You, utilizes both her graduate degree in Southern Literature and her personal experience with stalkers in a story about a killer who terrorizes a small North Carolina town.
Her first picture book (Bunny Roo) will be released in 2015.
Currently, Melissa resides in Virginia with her spouse, children, and many dogs.

8 responses to “Blog Tour and Review: Made for You by Melissa Marr”