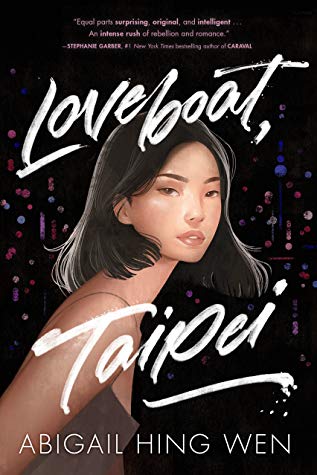 Perfect for fans of Jenny Han and Sarah Dessen, and praised as “an intense rush of rebellion and romance” by #1 New York Times bestselling author Stephanie Garber, this romantic and layered Own Voices debut from Abigail Hing Wen is a dazzling, fun-filled romp.
“Our cousins have done this program,” Sophie whispers. “Best kept secret. Zero supervision.”
And just like that, Ever Wong’s summer takes an unexpected turn. Gone is Chien Tan, the strict educational program in Taiwan that Ever was expecting. In its place, she finds Loveboat: a summer-long free-for-all where hookups abound, adults turn a blind eye, snake-blood sake flows abundantly, and the nightlife runs nonstop.
But not every student is quite what they seem:
Ever is working toward becoming a doctor but nurses a secret passion for dance.
Rick Woo is the Yale-bound child prodigy bane of Ever’s existence whose perfection hides a secret.
Boy-crazy, fashion-obsessed Sophie Ha turns out to have more to her than meets the eye.
And under sexy Xavier Yeh’s shell is buried a shameful truth he’ll never admit.
When these students’ lives collide, it’s guaranteed to be a summer Ever will never forget.
“A unique story from an exciting and authentic new voice.” —Sabaa Tahir, #1 New York Times bestselling author of An Ember in the Ashes
“Equal parts surprising, original, and intelligent. An intense rush of rebellion and romance.” —Stephanie Garber, #1 New York Times bestselling author of Caraval
“Fresh as a first kiss.” —Stacey Lee, award-winning author of Outrun the Moon
"Fresh, fun, heartfelt, and totally addictive, a story about finding your place—and your people—where you least expected." —Kelly Loy Gilbert, author of the William C. Morris Award finalist Conviction

Loveboat, Taipei has a lot of good things going for it. It’s also book that takes readers on an experience many might not have known about. There are also things which can be improved on.

I read this back in early February (I am so far behind with reviews) for my book club while I was curled up at home with the flu. Ever’s been sent to Taipei for the summer. Ever’s a dancer at heart, but her parents dream of medical school for her. Their hope is that school in Taipei will immerse herself more in her culture. I admit, I scoffed at Ever’s reluctance to go to a foreign country to study. Who wouldn’t want to go to a foreign country? But once she gets to Taipei, the spellbinding, frenetic energy kept me pinned to my seat. Being immersed in Taiwanese culture, from its clubs to its markets, is all well done. It was a joy to be able to go to Taiwan with Ever.

About halfway into the book, my enjoyment wavered. A love triangle (or maybe a square?) happens. Rick is the “golden child,” brilliant and praised for his intelligence. Xavier is the broody one whom most of the students swoon for. The love triangle is so sudden and happens, it seems, at random. Where were the feelings from the participants coming from? There’s a moment that brought up an interesting conversation with my book club.

Since the main setting is a school, many characters are introduced. Each character tries to bring new things to the plot. I like what the book tried to do with the characters: smashing Asian stereotypes of being good at math or Asian men being effeminate; discussing mental health, which is a taboo topic in Asian cultures; Ever finding herself. Let’s talk about stereotypes. Let’s talk about mental illness. Let’s talk about the main character discovering herself. However, cramming all of these subplots (and more I didn’t mention) into one book slowed the story down for me.

Overall though, I liked this debut a lot. It’s ambitious and I think it will bring about some key conversations. I am definitely going to read the companion novel. Who is the book going to follow? I must know!