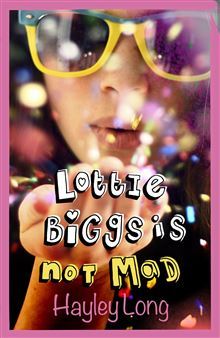 Lottie Biggs Is (Not) Mad

My name is Lottie Biggs and in three weeks time, I will be fifteen years old. My current hair colour is Melody Deep Plum which is not as nice as Melody Forest Flame but definitely better than the custard colour I tried last week, and this is my book.

It's about important things like boys and shoes and rescuing giraffes and NOT having a crush on that guy Gareth (even though he has manly thighs) and hanging out with your best friend having A BLATANTLY FUNNY TIME. It is definitely not about sitting in wardrobes or having a mental disturbance of any kind.

Painfully honest and laugh-so-hard-you-forget-to-breathe funny, Hayley Long's infamous Lottie Biggs tells her story with wit and depth. This book is a genuine YA must-read.

This is one of the funniest books I’ve read all year – and it was such a surprise, too! I didn’t expect to enjoy Lottie Biggs Is (Not) Mad as much as I did, but with such passionate storytelling, highly engaging characters and a truly entertaining voice, I almost wish I’d read it sooner.

Hayley Long, following in the footsteps of many UKYA (or if you want the slightly less Twitter-friendly version – United Kingdom Young Adult) authors, is a hugely prolific writer, but I’d only read What’s Up With Jody Barton? before I stumbled upon this recently re-released series opener.

Lottie Biggs is your average British teenager – though I should point out that this book is set in Wales, which makes a really refreshing change since most UK-based books are set in London. She loves being with her friends, doesn’t pay much attention in school and uses up considerable energy trying to make up her mind about her relationship with her possibly-boyfriend Gareth. She is uproariously funny and totally unforgettable. She’s loud, proud and has once of the most unique voices I’ve seen in recent young adult fiction.

This book is written from the heart and where that really shows is in the writing style. It’s written like an extended essay or school project, but you won’t find musings on world history or a detailed study of population demographics here. In fact, it’s written in exactly the way school students are told not to write; starting with page upon page of personal details, interests and long sentences, constantly carried away on tangents – and I think that’s what makes it feel so real. It’s clear that Hayley Long understands how a young teenager thinks and writes. Lottie has no filter and she portrays her life as she sees it, full of everyday events and extraordinary vitality. She talks to the reader, to the person who will be grading her assignment at the end of the year and even to her teachers (though that’s mainly so she can complain about them).

However, this book deals with more serious issues than you’d think. It focuses on the importance of friendship, staying true to yourself, and prehaps most brilliantly, mental health. It doesn’t take centre stage until later in the book, but Lottie suffers from what she terms a “mental disturbance of a significant nature” and which appears to have symptoms similar to that of bipolar disorder or one of a number of related mood disorders.

The thing about mental health in YA is that it’s often approached as this huge problem that must be cured, circumvented or otherwise dealt with in a huge, earth-shattering, profound way. This book shows mental health – and mental ill-health – in its purest, most realistic form: confusing, powerful, difficult to define, and most essentially of all, as something that often co-exists alongside a life of relative normalcy and everything that comes with it, whether that’s being late for school or being in a love-hate relationship with a guy named Gareth. Did I mention how much I loved Gareth in this book? He’s not designed to be swoon-worthy or ridiculously handsome, but he’s a great character and I enjoyed every second he was on the page.

There are of course other great characters to meet in this book, too. Lottie’s co-workers and mother appear regularly but it’s her best friend Goose that you’ll really want to read about. A pseudo-intellectual-goth-musician crossover, she too seems real, loyal and very funny.

The downsides to this book include the fact that sometimes the intense writing style tends to grate and that the word ‘plot’ can only be used loosely when it comes to the overarching story. It’s also probably a little too easy and sugarcoated for most readers – for example, Lottie’s mental health issues are spotted, diagnosed and start to be treated pretty quickly, without any of the disbelief, malpractice or general incompetence we know occurs in reality – but I’d still recommend it. Some international readers may find the very British style and slang hard to adapt to, but with patience and the Urban Dictionary at hand, there’s no reason why that should stop you reading. I loved the book so much, both sequels are already on my to-be-read list. Definitely recommended. 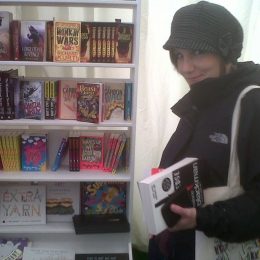 Hayley Long was born in Ipswich, England ages ago and grew up by the sea in a town with the suitably picturesque name of Felixstowe.

She had a lot of different jobs before she started writing books; amongst other things, she sold shoes, folded sweaters, worked in bars, cleaned tents, guided people through a Tunisian souk, did vague things in various offices, and taught English as far away as Belgium and as nearby as London.

Her first novel for teens was Lottie Biggs is Not Mad, which was awarded the White Raven Award for exceptional and innovative books for children by the International Youth Library in Munich. Since then she’s had four more books published and translated into several different languages, been nominated for awards and been on the news – in a good way. 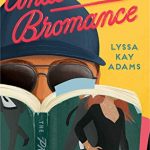 6 responses to “Review: Lottie Biggs Is (Not) Mad by Hayley Long”