Life on the Refrigerator Door

Claire and her mother are running out of time - but they don't know it. Not yet.

Claire is wrapped up in all that comes with being a teenager—boys, school, friends, identity. Claire's mother, a single mom, is rushed off her feet at work and they rarely find themselves in the same room at the same time. It often seems that the only thing they can count on are notes to each other on the refrigerator door.

Yet when a crisis overtakes their lives, a momentous change redefines their relationship and unfolds in their exchanges on the refrigerator door. Short, powerful and unforgettable, author Alice Kuipers’ novel looks deep into the complex relationship between mothers and daughters, and the distances that can open up between people who live together but exist in their own worlds. Told entirely through notes, Post-Its and letters, this debut will stay with you forever.

Life on the Refrigerator Door, like The Statistical Probability of Love at First Sight by Jennifer E. Smith or The Year of the Rat by Clare Furniss, is a short book with a long title that punches way above its weight on the YA shelf. It’s such an underrated book, too. I talk about it as often as I can – in features and guest posts, in lists and recommendations – because it is so worth reading. It’s not a new release, but there’s something timeless about it that makes you want to read it time and time again.

The best thing about the book is, of course, the writing style. It’s stunningly original. Alice Kuipers has achieved the impossible in her debut novel – a sense of character and story that leaps off the page – and in a style most auhors would never work up the courage to attempt.

Life on the Refrigerator Door isn’t just moving and emotional, however. It’s also funny and realistic, bringing together the drama of break-ups and feuding, school stress and a hectic work schedule without overstretching the plausibility of the format. Claire and her mother – both well-rounded, believable, strong female characters – argue and become resentful, but they come through for each other whenever they can and that’s what counts.

This is also a book that makes the reader work to create an image of the events unfolding within its pages. There’s no space – or reason – for drawn-out descriptions here. It’s up to you to fill in the blanks and imagine what isn’t being said, and I really loved that. So many authors assume that readers can’t work things out for themselves, but here Kuipers assumes that you can. The book is perfectly paced and the notes, no matter how brief, hold your attention. You’ll find yourself searching for key details in the most straightforward sentences, because in this book, every word counts.

Make no mistake: this book has a highly focused and clear plot. I won’t spoil it for you in this review but I will say that foreshadowing helps build it from the ground up; when it finally coalescses into a carefully yet beautifully illustrated  picture of a mother-daughter relationship and the heartbreak even everyday life can bring, you won’t be able to forget it.  There may not be any Dauntless knife-throwing or Shadowhunter demon-slaying in this book, but that only makes you love it more.

In short: Life on the Refrigerator Door is a book that will stay with you long after you’ve finished reading it; it brings new meaning to the word unforgettable. Fantastically well-written and full of character, it’s truly original and entertaining as well as beautiful. Close to perfect and so worth reading. 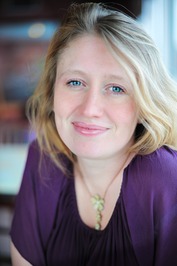 Alice Kuipers was born in London, England, but moved to Canada in 2003 when she fell in love with a Canadian. She lives in Saskatoon, Saskatchewan (which took a while to learn to spell). She has three children, a girl and two boys.

Her first novel, Life on the Refrigerator Door, was published in 28 countries, won several awards and was named as a New York Times book for the Teen Age. Her second book is called Lost For Words in the US, and The Worst Thing She Ever Did everywhere else. It won the Arthur Ellis Award, was shortlisted for the White Pine and Willow Awards, and was published in eight territories.

40 Things I Want To Tell You, her third book, was published in 2012. She has also written picture books for young children and her latest novel for young adults, The Death of Us, will be published in September 2014.

2 responses to “Review: Life on the Refrigerator Door by Alice Kuipers”