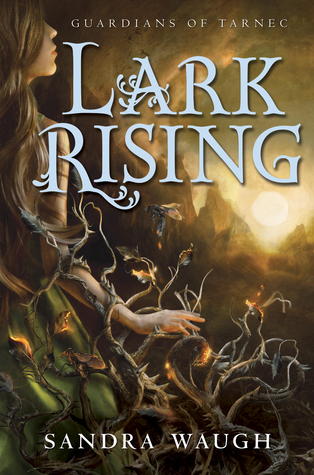 Lark has foreseen two things—she will fall for a young man with sage green eyes,and he will kill her.

Sixteen-year-old Lark Carew is happiest close to home, tending her garden and gathering herbs for medicines. But when her Sight warns her that monsters called Troths will soon invade her village, Lark is summoned on a journey to seek help from the legendary Riders of Tarnec. Little does she suspect that one of the Riders, Gharain, is the very man who has haunted her visions. Or that the people of Tarnec have called her there for another reason: Lark is the Guardian of Life, the first of four Guardians who must awaken their powers to recover four stolen amulets. Together, the amulets—Life, Death, Dark, and Light—keep the world in Balance. To take back the Life amulet, Lark will have to discover her true inner strength and give in to a love that she swears will be her downfall.

WOW!  As a lover of fantasy, I pay attention to the recommendations of other trusted bloggers.  Among these is Alyssa from The Eater of Books and since she loved Lark Rising, I had it in my TBR list for a long while.  What an amazing trip this was, I which I could share this book with everyone.

Lark and her cousin Evie have been raised by their grandmother since their parents died in an attack when they were three.  Lark has the gift of sight which to her it feels like a curse since it makes it difficult for her to interact with other people.  Any close contact is overwhelming to her since she can ‘see’ that person’s past.  She also has prophetic dreams that are sometimes disturbing.  But she also dreams about a breathtakingly handsome man that will be her undoing.  I know that some readers might find Lark’s character development kind of a cliché, but I found it endearing.  I liked to see how she went from a shy, insecure, naïve girl to a brave, accomplished and secure young lady.

Gharain is one of the Raiders of Tarnec, one of a dozen elected Riders that defend the weak and guard the balance of the world.  He seems to take an instant dislike to Lark, but it is more of a defense mechanism.  They have to work together to recover the amulets that were taken and restore balance to their world. At the end, he loves, understand, trusts and protects Lark.   Their relationship was so sweet and genuine.  I really liked them individually and as a couple.

The world building was very well done. From the map included in the book to the description of the landscape, the kingdom of Tarnec, the forest, the mountains, everything came to life within the pages of the book. This is one of the most important elements for me when reading fantasy because at a certain level I need to believe in it.  The writing is beautiful, poetic, lyrical, enthralling… I’m sure you get the idea why I loved it SO hard. I cannot wait for book two – Silver Eve – due to be published in September.

Overall, Lark Rising is a story of growth, faith, magic, love, and balance. A must read for fantasy lovers anywhere. 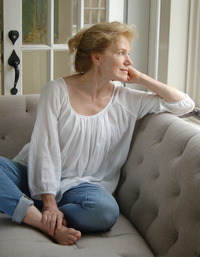 Sandra grew up in an old house full of crowded bookshelves, in walking distance of an old library that allowed her to drag home a sack of six books at a time. It goes without saying, then, that she fell in love with the old house in Litchfield County, CT, because of its many bookshelves, and she lives there now with her husband, two sons, and a dog who snores. Loudly.

« Waiting on Wednesday {Wolf by Wolf by Ryan Graudin}
{Bookish Babble} I want YA Fantasy with a Kickass Female Lead! »