Pretty and popular track star Marijke Monti is confident about almost everything – she’s got great friends, a great family, and she’s on her way to the State Track Championship. In fact, the only thing Marijke isn’t confident about is her relationship with Tommy Lawson.

Lily Spencer has spent her entire high school career preparing for the future – she’s participated in every extracurricular activity and volunteer committee she could. But, at home, she watches her mother go on date after date with dud-dudes, still searching for “the one.” Lily realizes that she’s about to graduate and still hasn’t even had a boyfriend.

While they live on each other’s periphery at school, Lily and Marijke never seemed to have much in common; but, after a coincidental meeting at the movie theater, Lily gets an idea – why can’t life be like a movie? Why can’t they set up their perfect romantic situations, just in time for their senior prom, using movie techniques?

Once the girls come up with the perfect plans, they commit themselves to being secret cohorts and, just like in the movies, drama ensues.

If you would have asked me about 75 pages in if I thought I would end up liking this book, I would quickly have said “nope”. I was instantly turned off by one of the two narrators (I’ll explain why later) and I began dreading her chapters but I finally got past that and I’m glad that I did. I ended up liking this book and I actually ended up rooting for the narrator that I previously disliked.

To begin, it takes some big kahunas to act out movie scenes for a guy; whether you are already dating him or are trying to attract his attention, it’s incredibly brave. I have to give it to these girls; they made a pact and followed it through. The story revolves around Marijke and Lily, two girls who are strangers until their chance meeting at the movie theater. Now, I am an avid movie watcher/goer which was probably what attracted me to the book and I loved that this all started at a movie theater. Kelly used a good mix of old and new movies as reference points for these girls and I really enjoyed them, especially the frequent 90’s references which all made me grin like crazy. I didn’t exactly love the way that the movies were tied in, I felt like they could have made a bigger impact, but I enjoyed it nonetheless.

Marijke and Lily are an interesting pair, they are complete opposites and strangers before their chance meeting but throughout the book a strong friendship is forged. This friendship is easily the best part of this book, everyone is so focused on finding a happily ever after that they forgo friends but their quest for love actually brought these two girls together. I’m not saying that it’s anywhere as good as the friendship in Open Road Summer but that is a nearly impossible standard to compare to. Their friendship was an accurate portrayal of friendships, they changed each other for the better and the worse; Marijke gave Lily a makeover which caused some identity issues but they also taught each other how to communicate and deal with situations. It was a give and take relationship which was interesting to read.

Marijke. Marijke. Marijke. I was so frustrated with Marijke’s character when I first started this book, I wanted to smack her in the head so many times that I lost count. Her boyfriend Tommy, who can be the world’s biggest douchebag, was her world and she ended up trading her identity for that of “Tommy’s girlfriend”, effectively losing herself and her friends. She revolved around Tommy and she didn’t even realize that she lost everything that used to be important to her until Lily came into the picture, a true friend who wasn’t afraid to stand up to Marijke.

It got to the point where I didn’t want to read anymore but when I evaluated why, I realized that it was personal. It hit a little too close to home. I was in a relationship and it wasn’t good, I was consumed and I couldn’t even see. My friends would try to talk sense into me but I would never listen. I was Marijke but less athletic and vocal and annoying, I’d like to think. Since that relationship, I have been an advocate for smart dating and not dating just to date, especially not dating an attractive douchebag. I just took this situation so personally and when she kept forgiving him, I was more frustrated than I should have been. I understand that now. After that, I started to understand Marijke and I was so proud of her again and again, there was real growth in this book.

Overall, I did really enjoy this book. It was a light read that went by fast with a great message that was weaved throughout the entire book. I loved the emphasis on friendship and the lessons that both girls learned along the way. There were some questionable things but as a whole, I really enjoyed this book. 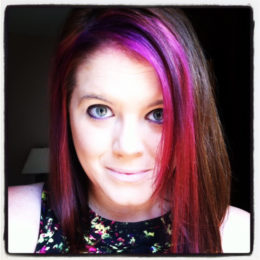 Kelly Fiore is the author of Taste Test. When she’s not writing, you can find her in the kitchen, trying out new recipes and rocking out to Def Leppard. A former high school English teacher, Kelly lives in Maryland with her husband and son.

2 responses to “Review: Just Like the Movies by Kelly Fiore”