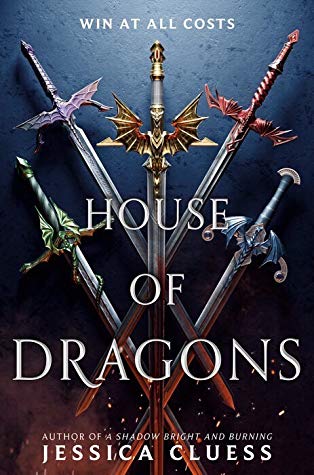 Five royal houses will hear the call to compete in the Trial for the dragon throne. A liar, a soldier, a servant, a thief, and a murderer will answer it. Who will win?
When the Emperor dies, the five royal houses of Etrusia attend the Call, where one of their own will be selected to compete for the throne. It is always the oldest child, the one who has been preparing for years to compete in the Trial. But this year is different. This year, these five outcasts will answer the call....
THE LIAR: Emilia must hide her dark magic or be put to death.
THE SOLDIER: Lucian is a warrior who has sworn to never lift a sword again.
THE SERVANT: Vespir is a dragon trainer whose skills alone will keep her in the game.
THE THIEF: Ajax knows that nothing is free--he must take what he wants.
THE MURDERER: Hyperia was born to rule and will stop at nothing to take her throne.

I saw Jessica Cluess on few panels at different events last year and she sold me with House of Dragons when she said some of the dragons have companion goats that they boop noses with. I’m a simple person. I hear dragons boop noses with goats and I’ll read a book. But I’m giving credit where it’s due because Jessica Cluess set the bar high with this series and I see all the possibility!

The book’s marketing says it’s Game of Thrones meets The Breakfast Club. I couldn’t wrap my mind around that, but House of Dragons is that! Told from five POVs, the book’s five competitors from different families will vie for the legendary Dragon Throne. Some seem to have the throne already in their hands, some are looked down on for obvious reasons.

Turns out they’re a true band of misfits who are all messed up in different ways, but you come to understand their motives and why they are the way they are.  Sometimes it’s difficult to empathize with them. I think that’s the most rewarding part. They’ll tug at your heartstrings while they’re plotting against the other competitors. You want political intrigue? You got it. You want schemes and action? You get that too.

The real stars are the dragons. Each are unique. Each are an extension of the young person who cares for them. As with their riders, some are regarded higher than others. But do you want dragons that actually play an integral point to the plot and are majestic and fantastic and even make you bawl your eyes out? View Spoiler »Forever crying about Dog. « Hide Spoiler That’s just me? Well, regardless, they’re all here in House of Dragons.

Writing from multiple points of view can be tricky. In House of Dragons, I feel it was accomplished decently but still left out a lot of the character development. Since it’s the first book of a duology, it has to set up each character’s world and the world overall. With so much ground to cover, sometimes the characters suffer for it. There are also moments when the book eludes to Game of Thrones in a wink-wink manner that pulled me out of the story. Also, the characters use modern phrases and words that made me think, “When is this taking place exactly?”

But I had so much fun even when I was sobbing that I’ll put up with those. Give me book 2 now!

8 responses to “{Review} House of Dragons by Jessica Cluess”