The Geography of You and Me

Also by this author: The Statistical Probability of Love at First Sight

Lucy and Owen meet somewhere between the tenth and eleventh floors of a New York City apartment building, on an elevator rendered useless by a citywide blackout. After they're rescued, they spend a single night together, wandering the darkened streets and marveling at the rare appearance of stars above Manhattan. But once the power is restored, so is reality. Lucy soon moves to Edinburgh with her parents, while Owen heads out west with his father.Lucy and Owen's relationship plays out across the globe as they stay in touch through postcards, occasional e-mails, and -- finally -- a reunion in the city where they first met.A carefully charted map of a long-distance relationship, Jennifer E. Smith's new novel shows that the center of the world isn't necessarily a place. It can be a person, too.

The Geography of You and Me appealed to me because a) it’s written by Jennifer E. Smith who is amazing and b) it was about traveling; I have always had this need to travel, whether it’s around my extremely large state or around the world, I just want to see everything that I can. I thought it would be fun to change up my review style a bit today. Since this book focuses on geography and traveling, I decided to list five reasons why I think that traveling is important and use those points as a platform to discuss the book. Every reason will also have a quote because Jennifer E. Smith is just a master of words.

“That was the thing about books, she was realizing; they could take you somewhere else entirely, it was true. But it wasn’t the same thing as actually going there yourself.”

“If you were to draw a map of the two of them, of where they started out and where they would both end up, the lines would be shooting away from each other like magnets spun around on their poles. And it occurred to Owen that there was something deeply flawed about this, that there should be circles or angles or turns, anything that might make it possible for the two lines to meet again. Instead, they were both headed in the exact opposite directions. The map was as good as a door swinging shut. And the geography of the thing—the geography of them—was completely and hopelessly wrong.”

I’ll just give you a moment to recover from that beautiful writing.

“Standing there alone in the hallway, she couldn’t help smiling. For the first time in her life, she realized there was no hope of blending in. Here, she was the one who was different. She was the one with the accent. The new girl. The object of curiosity. And to her surprise, she found that she didn’t mind.”

“All these years, she’d imagined her parents were out there in the world trying to take in as much as possible: photos and stories and memories, check marks on a list of countries and pins on a globe. But what she hadn’t understood until now was that they’d left pieces of themselves in all those places, too. They’d made a little home for themselves wherever they went, and now Lucy would do the same.”

“How long could a single night really be expected to last? How far could you stretch such a small collection of minutes? He was just a boy on a roof. She was just a girl in an elevator.”

“There was a lump in her throat as she watched him fidget with the buttons on his vest, and it struck her as the truest form of kindness, the most basic sort of love: to be worried about the one who was worrying about you.”

“They just stood there, regarding each other silently, the room suddenly as quiet as the elevator had been, as comfortable as the kitchen floor, as remote as the roof. Because that’s what happened when you were with someone like that: the world shrank to just the right size. It molded itself to fit only the two of you, and nothing more.”

To wrap it up, I loved this novel because I love Jennifer E. Smith’s mind and words; she amazes me with every book. She perfectly captured the beauty in traveling the world and beauty that can be found in everyday life if you only look for it. This book has it all: swoon, compelling characters, mistakes, happiness, and most of all, geography.

“Something like that,” he said, his eyes shining, and she realized just how much there was she didn’t know about him. He was like one of her novels, still unfinished and best understood in the right place and at the right time. She couldn’t wait to read the rest.” 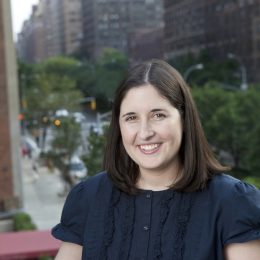 Jennifer E. Smith is the author of The Statistical Probability of Love at First Sight, The Storm Makers, You Are Here, and The Comeback Season. She earned her master’s degree in creative writing from the University of St. Andrews in Scotland, and currently works as an editor in New York City. Her writing has been translated into 28 languages.

« Cover Reveal: Who We Were by Christy Sloat
Stacking The Shelves #55 & Weekly Recap »

5 responses to “Review: The Geography of You and Me by Jennifer E. Smith”