The Fine Art of Pretending

According to the guys at Fairfield Academy, there are two types of girls: the kind you hook up with, and the kind you're friends with. Seventeen-year-old Alyssa Reed is the second type. And she hates it. With just one year left to change her rank, she devises a plan to become the first type by homecoming, and she sets her sights on the perfect date—Justin Carter, Fairfield Academy’s biggest hottie and most notorious player.

With 57 days until the dance, Aly launches Operation Sex Appeal and sheds her tomboy image. The only thing left is for Justin actually to notice her. Enter best friend Brandon Taylor, the school’s second biggest hottie, and now Aly’s pretend boyfriend. With his help, elevating from “funny friend” to “tempting vixen” is only a matter of time.

But when everything goes according to plan, the inevitable “break up” leaves their friendship in shambles, and Aly and Brandon with feelings they can’t explain. And the fake couple discovers pretending can sometimes cost you the one thing you never expected to want.

I’m a swooner, I’m not gonna lie, and Rachel Harris understands/writes books for people like me! (Well, this book at least, I didn’t like her My Super Sweet Sixteenth Century series.) From the fifth chapter, I was already hardcore invested in this “friendship” (even though they both wanted more and were just too dumb to admit it) and I LOVED how these characters grow and struggle with feelings that they didn’t expect. It was basically all kinds of right.

The Fine Art of Pretending is written in dual POVs and it added so much to the story; typically I am fine with just one perspective but since this is a friends turned more story (HALLELUJAH), we needed to see how the actions affected both parties. I am a firm believer that men and women can be friends but Aly and Brandon are AMAZING together and I love them. Aly liked Brandon in the past but was nicely rejected and has since pushed all of her feelings in the corner; as the book progresses, she finds that her feelings might have never left. Brandon, on the other hand, loves and respects Aly so much which is why he can only be her friend; since his father died, he believes that friendships are the only things that last, love only screws everything up and he can’t lose Aly. They come from completely different places and it’s quite the… swoony ride with these two.

Speaking of the journey, THESE TWO GROW SO MUCH. It just amazes me how they each grew individually but also so much together.

To get to the plot, I was frustrated by Aly on many occasions; she just kept going deeper and deeper away from who she is but I understand that this is a story written about teenagers and it was authentic in that sense. She couldn’t see what Brandon was actually telling her and she decided the need to be “dateable” or “lovable” consumed her thoughts, well until thoughts of Brandon took over. 🙂 Even though she annoyed me a lot, I loved when realization dawned on her; she finally understood that the guys actually respected her and that being a Commitment meant so much more than the fleeting attention of a horny male.

Wrap-up: I thought that it taught a good lesson about self-discovery and loving yourself. I loved it. Great, quick read. 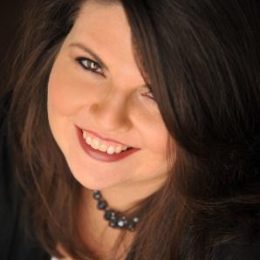 New York Times bestselling author Rachel Harris writes humorous love stories about sassy girls next door and the hot guys that make them swoon. Emotion, vibrant settings, and strong relationships are a staple in each of her books…and kissing. Lots of kissing.

An admitted Diet Mountain Dew addict and homeschool mom, she gets through each day by laughing at herself, hugging her kids, and watching way too much Food Network with her husband. She writes young adult, new adult, and adult romance, and LOVES talking with readers.

« What Tomorrow Brings: The Awesome by Eva Darrows
ARC Review: One of the Guys by Lisa Aldin »

One response to “Review: The Fine Art of Pretending by Rachel Harris”