Eyes of the Woods

Eris Helgren knew her life was about to end. A daughter of the Priory--a generations-old family who protected their territories from nightwalkers--Eris was strong and independent. But on her birthday, her father would announce her betrothal. A year later, she would be forced to marry.

What Eris didn’t know was that the very beings she hunted were watching her, and that being tamed wasn’t what would kill her after all.

In a land where the woods were forbidden and the laws meant life, Eris will have to make a decision that could bring peace between enemies, or war among friends.

I confess that I purchased Eye in the Woods because of its beautiful cover.  Really, look at it! It’s gorgeous!  How could I resist it? Well, obviously I couldn’t.  After reading the book and went to investigate more about its author, Eden Fierce, and I found out that she published this book when she was fourteen!  Now, that’s just plain amazing.

Eyes of the Woods has to do with nightwalkers, which translates to vampires.   Eris is the only daughter of the Priory and together with her three brothers, they are trained to kill the nightwalkers.  They think that the nightwalkers are crazed beings that stopped being human (sort of like zombies) and are only driven by the thirst for human blood.   Humanity is in danger of being exterminated, so the survivors live in towns that are protected by different Priories.

“Anyone else’s children would have a burden, but the offspring of Dyre Helgren were bred and born with strength and skill. Clemens was lethal with a sword. Lukas, when his hair wasn’t in his eyes, was frighteningly accurate with a bow, and Jonathan could pin a firefly to the bark of a tree with his daggers.  I was astute in all three.”

Erin’s 17th birthday is fast approaching and that night she must stand in front of the town of Ona in her red dress and her father will announce the selected a man that will be her husband.  They are to “court” for one year and then marry on her next birthday.  Erin hates this, she feels a sense of premonition of doom that is aggravated by the consistent feeling of being watched (thus, “eyes in the woods”.)  I can’t tell you much more without spoiling it for you.

“You’re breaking my heart,” he said sighing. “I’ve never seen a young lady so forlorn over her betrothal. Did I really raise a daughter so obstinate?”

Erin is a good tracker, a loving daughter and sister, loyal, smart, strong, and resistant to the constraints of her time.   Daniel is very patient, lonely, intelligent, secretive, and understanding.  I did like that their relationship was slow to grow, both in trust and in love.  Daniel is first her guide, teacher, and protector, and then becomes Eris’ friend, partner, and love. The romance is pretty clean, as you can expect from a teenage author.

“I had built so many walls: as a child to show my strength as a Prior, and then as a young woman to try to convince my father a betrothal wasn’t necessary. Day by day Daniel had quietly dismantled the walls I had so carefully constructed.”

Eyes of the Woods is not perfect.  It suffers from Information dump, especially at the beginning.  The world building was pretty good and it left very few unanswered questions for me.  However, it is not all original.  Now, I’m not saying that I was expecting a completely original book, after all we are talking about vampires here, but I felt that it borrowed certain aspects from the Twilight books. For instance, Eris feels like she’s predestine to live in the woods and feels bad for the creatures that she’s supposed to kill, the nightwalkers can go out during the day and have red eyes, and Daniel spies on Eris. Another observation was the Inconsistent use of words, phrases and behaviors that seem to be out of the time period.

I love the Helgren family, they were so loving that the affection is palpable through the pages. The ending is pretty well executed. It was unexpected for me, but it felt more “real” since it’s not all pink and wrapped in bows.  I think Fierce did a good job for her first book, I’m not sure if the book was edited or not, as I said above, there were some inconsistencies.

Overall, Eyes of the Woods was an entertaining, short read.  It has room for improvement, but it is impressive writing and a good story for the fourteen-year old author.  It will be very interesting to see what she writes next. 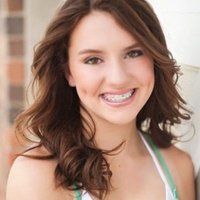 Eden Fierce was born August 25, 1999 and lives in Enid, Oklahoma with her parents and two siblings. She published her debut novel, YA paranormal romance Eyes of the Woods, in August 2014, at the age of fourteen. 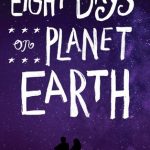 « Bookish Babble: I’m a mood reader with a semi-schedule
{Effie Reviews} The Healer by C.J. Anaya »

8 responses to “Review: Eyes of the Woods by Eden Fierce”