A young sorceress’s entire life has been shaped to destroy the empire controlling her world. But if everything she knows is a lie, will she even want to fulfill her destiny? The sequel to Death Sworn is just as full of magic and surprising revelations, and will thrill fans of Leigh Bardugo and Robin LaFevers.

At seventeen, Ileni lost her magical power and was exiled to the hidden caves of the assassins. She never thought she would survive long. But she discovered she was always meant to end up, powerless, in the caves as part of an elder sorcerer’s plan to destroy the evil Empire they'd battled so long. Except that Ileni is not an assassin, and she doesn't want to be a weapon. And, after everything, she’s not even sure she knows the truth. Now, at the very heart of the Empire—its academy for sorcerers—the truth is what she seeks. What she finds challenges every belief she holds dear—and it threatens her fledgling romance with the young master of assassins.

Leah Cypess spins an intricate and beautiful conclusion to Ileni's story. In the end, it may not be the epic decisions that bring down an empire, but the small ones that pierce the heart.

I really enjoyed Death Sworn (see my review here) and I was eagerly waiting for Death Marked.  I did liked it, but it was not what I expected.

Death Marked starts a few weeks after the ending of the previous books and finds Ileni wholly unprepared for the task she set for herself.  She is allowed to stay at the imperial academy for sorcerers and she is placed in the more advanced class. Karyn, which we met before is the headmaster and wants to keep an eye on Ileni and of course, learn what she knows about the caves.

Ileni is a force to reckon with.  She doesn’t know a lot about life, she is very ignorant and naive in many respects, but she is great at magic.  She’s eager to learn new things, but not willing to compromise her beliefs.  Ileni turned out to be very… indecisive in this book.  She kept changing her mind on what to do and how to do it.  She realized that the world is not black and white, and there are no absolutes. She tried to always do what was right, but realized that it is very subjective and hard to achieve.

“There was nothing worth fighting for, nothing good and pure, not path that didn’t end in pain.  It was her illusions that brought her to this point. And she was going to need more than illusions to get past it”

Several new characters are introduced in Death Marked, but the most important is probably Evin.  He’s in the advanced class with Ileni and has incredible power.  He tries to protect his brother from reality and the demands of the Empire.  I did like Evin a lot, but I kept thinking: where is Sorin?  I’m sorry, but it just confused me because Evin and Ileni’s relationship was very different and almost sister/brother like.

“Evin roared with laughter, spontaneous and unfeigned.  He cocked his head to the side. “You’re interesting”

The way he said it, she couldn’t tell if it was a compliment or an insult.  Fortunately, she didn’t care.”

One of the things that I really appreciated was that the world building was expanded and explored a lot more.  There were a lot of burning questions while I was reading Death Sworn and they were answered here.  I did missed the Assassins’ Caves, but exploring the Academy and the Empire was just as fulfilling.  I really appreciate Cypess’ writing; it is insightful, enthralling and easy to read.  The plot was interesting.  It felt like a scavenger hunt, like the point of the book was for Ileni to understand the Empire and make up her mind about what to do about it.

There were a few issues with Death Marked.  First, the romance between Ileni and Sorin was non-existent.  I felt that their relationship was budding and quite promising, and then nothing happens in this book. I was very disappointed about it.  Second, they introduced Evin as a new love interest. Why?  It didn’t make any sense to me, not only that but Sorin kidnaps Ileni’s old boyfriend. Again, for what? I don’t feel that this added anything to the story.  Lastly, what the heck happened at the end?  It was NOT the ending of a series since it was way too open.  If you’ve ever read one of my reviews, you know that I wholly dislike that.

“Sorin was part of her, a piece of her heart.  The constant ache inside her, the pain of ripping out that part, was her price for walking away for him.  But magic was all of her.  She wasn’t sure she was strong enough to walk away from it.”

Overall, Death Marked was good, I mean I did enjoy the writing, the new setting, the world building, BUT it was lacking in the romance department and the ending was way to open for me.  Oh, the covers are gorgeous! 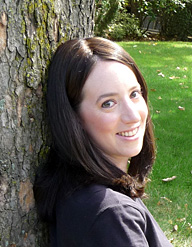 I wrote my first story in first grade. The narrator was an ice-cream cone in the process of being eaten. In fourth grade, I wrote my first book, about a girl who gets shipwrecked on a desert island with her faithful and heroic dog (a rip-off of both The Black Stallion and all the Lassie movies, very impressive).

After selling my first story (Temple of Stone) while in high school, I gave in to my mother’s importuning to be practical and majored in biology at Brooklyn College. I then went to Columbia Law School and practiced law for almost two years at Debevoise & Plimpton LLP, a large law firm in New York City. I kept writing and submitting in my spare time, and finally, a mere 15 years after my first short story acceptance, I sold my first novel to Greenwillow Books (HarperCollins).

I live in Silver Spring, Maryland (right outside of Washington, D.C.) with my husband and three children.