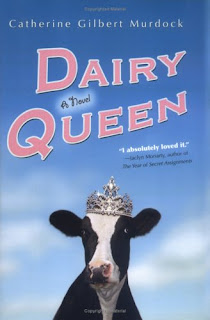 A while ago one of the topics for the Top Ten Tuesday hop was “best series” and I say the Dairy Queen books listed in several blogs and of course I had to read it.  I have to say that you guys were right, I LOVED this book!
D.J. is an amazing character.  She has a peculiar family that chooses to not talk about real issues.  I found the way she was taken for granted by her family unfair and she thought so too, but never complaint or voiced her concerns.  D.J. has an amazing voice and she was hilarious in her observations, it really felt like being inside the head of a 16 year old.  D.J.’s father was so unfair to all his children that I can’t understand what kept the family together at all.  Curtis limited “talking” was probably a survival skill to survive this family!  I liked Brian and I am glad that he came to his senses by the end of the book.
The story is told in the first person, from D.J.s perspective and she is telling her story to the reader her way.  The writing is fluid, funny and fresh.  Ms. Gilbert Murdock  is a genius!  I hope the next two books are just as good, I am really looking forward to reading them soon.
About the cover:  It’s funny, right?   Since D.J.’s family has a dairy farm (that she pretty much runs by herself) she is made fun off and called “dairy queen” so I guess is not as funny for her.

« 200 Follower Giveaway!
Top Ten Books I Want to Give as Gifts »