Broken Hearts, Fences, and Other Things to Mend

Gemma had her summer all planned out, but it takes a sharp turn when she gets dumped and finds herself back in the Hamptons after a five-year absence.

Being there puts her at risk of bumping into Hallie, her former best friends (that is, before Gemma ruined her life). But people don't hold grudges forever. Do they?

Gemma intends on making amends, but a small case of mistaken identity causes the people she knew years ago—including Hallie and her dreamy brother, Josh—to believe she's someone else. As though the summer wasn't complicated enough already.

The past four, FOUR, contemporaries that I’ve read (my favorite genre) have all been huge disappointments. I think three of them were 2 star reads and the last was 1.5 but no more! Katie Finn (Morgan Matson) wrote a five-star read that broke my streak and is still putting a smile on my face.

To be honest, I was crazy nervous about this book because I haven’t heard the greatest things about it but I should never have doubted Morgan because she’s incredible. Morgan has said that her MM books are character-driven while her KF novels are plot-driven and I think that sums it up perfectly. While I do prefer the character-driven stories, I loved this book so much; it was a plot-driven book that never felt too ridiculous and crazy. It was well written book and a fun journey, the best of both worlds.

Now, on to the story. Gemma Tucker is… human and as a human, she’s made mistakes. As an eleven year old, she wrecked a lot of havoc that she still hasn’t moved on from; after pushing it to the back of her mind and trying to be a better person, our story finds her coming face to face with the person that she hurt the most. Of course this doesn’t happen until after her boyfriend of two years dumps her out of the blue at Target; as you can imagine, Gemma isn’t her “best self” when this reunion is going to take place. Through a (plot-driven, convenient for the story) set of events, when the reunion that Gemma is dreading finally comes, a miscommunication of sorts is born  and Gemma is introduced as Sophie.

Gemma decides that this is a perfect opportunity to make up for her past and prove that she isn’t that terrible kid anymore. I really loved Gemma, she wasn’t the most likable character at the beginning but throughout the book she is growing; she is finding herself and beginning to understand that she isn’t her past.

The plot was a lot of fun and I really enjoyed all of it. That ending though… I saw it coming and I was literally freaking out ALL DAY about how it was going to come to pass. It was great, much lighter than what Matson typically writes but it was OUT OF THE PARK!

Basically, I loved it.

Also, the series had a cover redesign but I bought the old cover which is why I pictured it above. 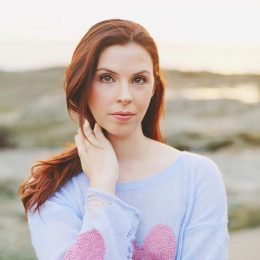 Katie Finn grew up in Connecticut, in a town that looks an awful lot like Putnam. During high school, she was a total theater devotee (like Madison) and never dreamed she’d be a writer. But lots of Katie’s high school misadventures have made it into her books…which just goes to show that you never know!

She currently lives in Los Angeles, California, in a house she wishes was a lot closer to the beach.

One response to “Review: Broken Hearts, Fences, and Other Things to Mend by Katie Finn”