Jules should be happy. She saved a lot of people’s lives and she’s finally with Sawyer, pretty much the guy of her dreams. But the nightmare’s not over, because she somehow managed to pass the psycho vision stuff to Sawyer. Excellent.Feeling responsible for what he’s going through and knowing that people’s lives are at stake, Jules is determined to help him figure it all out. But Sawyer’s vision is so awful he can barely describe it, much less make sense of it. All he can tell her is there’s a gun, and eleven ear-splitting shots. Bang.Jules and Sawyer have to work out the details fast, because the visions are getting worse and that means only one thing: time is running out. But every clue they see takes them down the wrong path. If they can’t prevent the vision from happening, lives will be lost. And they may be among the casualties…

I enjoyed most of Lisa Mcmann’s Wake series (the last book was not that great), so I jumped right in to the Visions series.  Crash was not what I expected, but I liked it enough to read the rest of the series.

I think that the reason that I found Bang to be much better is that I was already used to the weirdness of the visions and how the work.  Also, in Crash, poor Jules is figuring everything out and no one believes her.  Bang is more of a team effort.  I love the interaction between the DeMarco siblings.  Jules, Trey and Rowan have a really close relationship, probably due to the fact that their parents are less than stellar. Thankfully, they have each other to really upon.

Another great addition to the story is Sawyer.  Obviously, Sawyer is Jules’ crush in the previous book, but now we get to know him a lot more.  Jules and Sawyer’s story is similar to Romeo and Juliet, but with pasta sauce as the contention point.  That is to say that their families have been “enemies” for years and do not approve of them being together.  I really like Sawyer, he is loyal, supportive, open to new things, loving, willing to face a lot to be with Jules AND freaked out.  As you can read in the blurb, after Jules saved Sawyer, he inherited the visions.   This book is dedicated to solving a new mystery. Luckily – as I said before – now Jules has a better idea on how the visions work.

Jules is a likeable character.  She’s coming to terms with having a boyfriend for the first time and with feeling guilty for having somehow “passed” her visions to Sawyer (she thinks they’re contagious!) Jules’ father has problems with hoarding and with mood swings.  I’m not sure why his wife and children have not tried to do something about it, but instead just learned to accept the mess they live in and to avoid his flairs of madness. I hope there is some progress on that front in the next book.

The book is short, but in packs a lot.  It is really interesting to figure out the mystery one clue at a time.  I also enjoyed watching Sawyer and Jules figuring everything out.  The writing is easy to read, and it had a good flow, even though I found it really short.

About the narration: Bang was narrated by Joy Osmanski.  It’s the first book by Osmanski that I’ve “read” and I think she did a great job.  The pacing was good and the voices distinctive from each other.

Overall, I enjoyed Bang much better than Crash and I’m looking forward to the conclusion of the series. 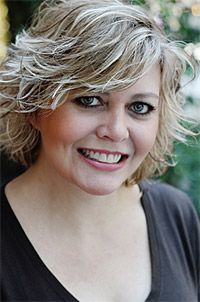 Lisa McMann lives and writes in Phoenix, Arizona. She’s happily married to her husband Matt and has two awesome kids, Kilian and Kennedy. She’s a native of Holland, Michigan and lived there from her birth on February 27, 1968 until 2004. She then moved to Arizona, where she can admire the desert and the scary mountain lion her daughter spotted in the backyard one time. Lisa likes to unwind by watching HGTV or any cooking show ever. She shares her writing space with two obnoxious yet well-loved cats, and wakes up at 5:30am so she can climb the mountain in the back of her neighborhood before it gets too hot outside. Finally, Lisa would like you to know that she enjoys Mexican food of any variety as well as pistachios, avocados, and bacon.