A modern take on the classic coming-of-age novel, inspired by Anne of Green Gables
In the grand tradition of Anne of Green Gables, Bridget Jones’s Diary, and The Three Weissmanns of Westport, Andi Teran’s captivating debut novel offers a contemporary twist on a beloved classic. Fifteen-year-old orphan Ana Cortez has just blown her last chance with a foster family. It’s a group home next—unless she agrees to leave East Los Angeles for a farm trainee program in Northern California.
When she first arrives, Ana can’t tell a tomato plant from a blackberry bush, and Emmett Garber is skeptical that this slight city girl can be any help on his farm. His sister Abbie, however, thinks Ana might be just what they need. Ana comes to love Garber Farm, and even Emmett has to admit that her hard work is an asset. But when she inadvertently stirs up trouble in town, Ana is afraid she might have ruined her last chance at finding a place to belong.

Ana of California. In case you haven’t heard of this (which is incredibly likely), this book is a retelling of… Anne of Green Gables! How fun! I love that Andi took a book that really doesn’t get retold that often and put a spin on it.  I heard about this book randomly on the interwebs one day and decided to read it because I’m obsessed with retellings of books that I’ve never (but one day will) read.

This book can be wonderfully summed up in the cover: a Hispanic young women moves to the farm and falls in love with the fields of possibility. I loved Ana and she is probably my favorite part of this book. She is such a complex character; both of her parents were in a gang which was the reason why they were killed in front of Ana as well as her Abuela years later. We get to see her struggle through losing everyone she loves and trying to keep others at a distance. She takes so much on her shoulders but it’s jaded her life view. Amazingly, through all the different group homes and foster houses, she still stands up for what she believes. Life has beaten her down royally but she still finds something to fight for. I really enjoyed her character.

She gets her one last shot in the foster system in the form of the Garber Farms with siblings Emmett and Abbie Garber. These people ROCK. Literally, talk about two amazingly written characters. Andi captured the three main characters WONDERFULLY. We get to take the journey alongside these characters and we get to sneak inside of Emmett and Abbie’s brains a bit which allows us to see how they view Ana as the book progresses. Fantastic.

On the other hand, the parts that I didn’t really like were with her best friend and… the boy. It felt very juvenile which was in direct opposition to everything we’ve learned from Ana’s POV. It was just frustrating to me and I couldn’t care about any of that. The ending was also rushed but overall I would recommend reading it.

I have no idea how closely it follow Anne of Green Gables but I think that if you’re looking for a slightly deeper contemporary, this could be for you! 🙂 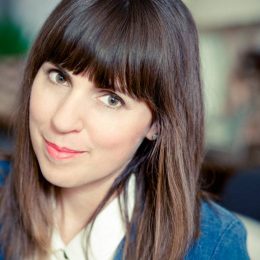 Andi Teran is a writer and performer originally from the deserts of West Texas. She has written about fashion, film, and culture for Vanity Fair, MTV, New York, and Monocle, as well as written and performed for various New York stages. She lives in Los Angeles. Ana of California is her first novel.

One response to “Review: Ana of California by Andi Teran”