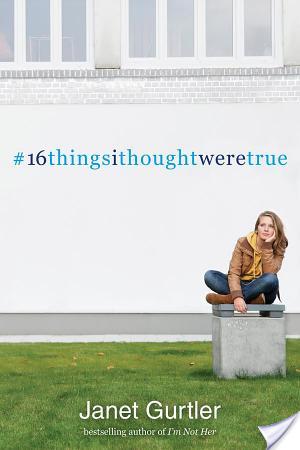 16 Things I Thought Were True

When Morgan's mom gets sick, it's hard not to panic. Without her mother, she would have no one—until she finds out the dad who walked out on her as a baby isn't as far away as she thought...

Now that they have a summer job together, Morgan's getting to know the real Adam, and he's actually pretty sweet...in a nerdy-hot kind of way. He even offers to go with her to find her dad. Road trip, anyone?

5000 Twitter followers are all the friends I need #thingsIthoughtweretrue

With Adam in the back seat, a hyper chatterbox named Amy behind the wheel, and plenty of Cheetos to fuel their trip, Morgan feels ready for anything. She's not expecting a flat tire, a missed ferry, a fake girlfriend...and that these two people she barely knew before the summer started will become the people she can't imagine living without.

16 Things I Thought Were True was one of the most anticipated books of 2014 for a lot of people – myself included. It has a fantastic premise. It’s the definition of modern contemporary, focusing on themes of family, friendship and first love through the eyes of a narrator who is not afraid to speak her mind. It’s even got a side order of social media and road trip story just to make it even more intriguing. I was convinced I was going to love it – and in some places I did – but I have to admit it did disappoint me a little.

Morgan needs to come to terms with a lot over the course of the story, so although the book is short it’s very memorable. When her mom suffers a heart attack, she’s completely knocked for six – but she’s not one to sit waiting for things to happen around her. She wants to feel proactive and as if she’s doing something that will make a difference. Almost losing one parent has made her realise more than ever before how much she’s lacking a father figure in her life. She adores her older brothers, but they’re wrapped up in their own little dramas. What she needs is to find the dad she’s convinced abandoned her before she was even born.

As this is a road-trip story, Morgan’s family don’t appear to have much of a role at first, but it soon becomes apparent that they are hugely important to Morgan’s narrative arc. She and her older twin brothers were raised by their mom, but it’s her dad who provides a focal point for Morgan’s journey. I love seeing families in YA and Morgan’s family is certainly one of the high points of this book. Amy and Adam may be her companions but the people she leaves behind are just as central to Morgan’s thinking process as her friends are.

Adam was a real surprise. Morgan makes him out to be a real jerk to begin with – and to be honest he’s never done anything to change her opinion of him before now – but he’s there for her without question when her mom’s taken to hospital and she needs someone to lean on. The great thing about him was that he was more consistent than most YA leads. He didn’t take off or vanish mysteriously into the mist only to return leather-clad on a motorbike. Morgan’s attraction to him wasn’t about mystery or tension, it was because he could admit his imperfections and above all, he genuinely likes her.

Amy was total sweetheart. Like Adam, she comes through for Morgan time and again – even when Morgan really doesn’t deserve it. She grows so much throughout the book, in confidence and in character, you can’t help smiling whenever she’s on the page.

As previously mentioned, social media is a catalyst for several sub-plots in this book. As well as providing the title – the hashtag preface seems to be somewhat of a trend this year, as you can also see it in books like #Scandal by Sarah Ockler – YouTube crops up as the birthplace of Morgan’s internet stardom, though not in the way you’d think. A video of her drunk-dancing in boys underwear was posted online, making her a viral sensation, and she is not happy about it. No one would expect the unashamed girl from the video to be insecure, but that’s exactly how it’s made Morgan feel – though it’s difficult to really empathise with her. She’s brash, mean and kind of a brat. I felt sorry for her, sure, but it’s impossible to feel empathy for someone who repeatedly refuses to think before she speaks and hurts many of those around her.

Morgan eventually does come to understand her mistakes, especially when it comes to judging her father, who she never knew and who lives just over the border in Canada, before she’s even met him. Unfortunately, it was too little, too late for me as a reader. The writing style grates and when you don’t even like a character’s voice, it’s almost impossible to like the character themselves. It wasn’t terrible, but it could have been so much better.

In short: this is a book with plenty of plot for its relatively small number of pages. It’s packed to the rafters with characters and romance, so if you like edgy, no-holds-barred narrators and unexpected plot twists, this one is for you. 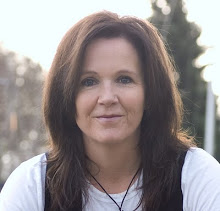 Janet lives near the Canadian Rockies with her husband and son and a little dog named Bruce. She does not live in an Igloo or play hockey, but she does love maple syrup and says “eh” a lot.

3 responses to “Review: 16 Things I Thought Were True by Janet Gurtler”