If you were to ask what types of books I’d read, I’ll reply by saying my favourite genre is, and always has been, mysteries and thrillers. But for some reason, I just haven’t been reading a lot of these types of books lately. Maybe it’s because the majority of YA books seem to be either fantasy or contemporary? But I don’t really have a good excuse regardless. I guess that was why I was so excited when these two lovelies fell onto my doorstep the other day. Unsolicited review copies are often a sore sport with reviewers – the pressure of having to read a book you don’t necessarily want to, and usually isn’t even in your tastes of books, can be the worst –  but these were both psychological thrillers so I was more than just a little excited to dive into these.

Edit: Okay so I may not have finished The Ex yet like I promised myself I would, but in my defense I’ve had school and book club reads and time goes way too fast for my liking. Excuses, I know, but hopefully I’ll have read it soon…. hopefully being the key word. 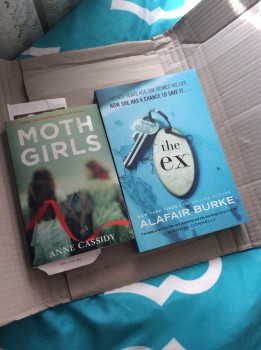 Helplessly drawn like moths to the light, two girls go missing in an evocative and gripping tale . . .

They called them the Moth Girls because they were attracted to the house. They were drawn to it. Or at least that is what is written in the newspapers that Mandy reads on the anniversary of when her two best friends went missing. Five years have passed since Petra and Tina were determined to explore the dilapidated house on Princess Street. But what started off as a dare ended with the two girls vanishing. As Mandy's memories of the disappearance of her two friends are ignited once again, disturbing details will resurface in her mind.

Moth Girls sounded a little but like a young adult version of Where the Memories Lie since they’re both stories about women whose best friend/s disappeared without a trace when they were in high school. But while Sibel Hodge crafted a gritty, edgy story about grief, reputation and the lengths one will go to to protect their loved ones that I absolutely fell in love with, Moth Girls barely managed to create a suspenseful atmosphere successfully. The story follows Mandy whose two best friends, Petra & Tina, disappeared five years ago, but despite what the synopsis leads you to believe, this isn’t about Mandy trying to find out what happened to the girls. No, not at all. This is a contemporary story through and through. It’s split into parts  and for the first 150 or so pages all we get is a detailed account of what Mandy’s life is like now – it’s mainly her pining over her very hot best friend occasionally broken up with some wondering about how much she is to blame for her friends’ disappearance. Maybe this would have been interesting if Mandy wasn’t so annoying, but I couldn’t get into her voice at all. She was a little too flat and dull for me to really care about…. which is not taking her sexist slut-shaming of her best friend’s girlfriend into consideration. I’m sick of that trope. Oh, and I hated how she changed her style and even her personality, to a certain extent, for her best friend – he liked vintage clothes so she scuffed her brand new heels to make them look like op shop bargains. I wanted to yell at Mandy that if this guy doesn’t like her because she wears brand new shoes then he isn’t for you. You run girl, you run far away from that.

But getting back to the story, we did get parts from Petra’s POV later which was so much better. Petra had substance as a character, she was realistic and lovable (and had a Friends addiction!) And since we knew that something awful was going to happen to her, there was a little tension in waiting to see what that was. My mind was busy trying to tie all the threads together. But we didn’t really get any of the thrilling stuff until the last thirty or so pages… and it was too little, too late by then The reveal didn’t make sense if I’m being honest. It wasn’t explained well at all. It was just there, and somehow meant to satisfy our curiousity. As if spending over 250 pages with these characters, we wouldn’t have wanted to know why they disappeared! News flash – we do. Very much so.

Overall, this wasn’t a poorly written story, it just was more of a contemporary than a thriller and that made me pretty sad. I did enjoy Petra’s perspective much more than Mandy’s and if the story had been written completely from her POV, maybe I would have enjoyed it more? And the non-existent ending was just icing on the cake. Not okay. If you are  looking for a well-written and engaging emotional thriller then I definitely recommend picking up Where the Memories Lie instead.