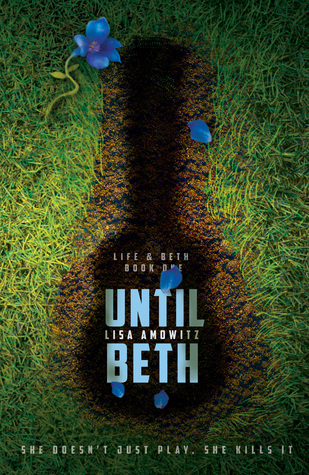 Also by this author: Breaking Glass, Vision, Until Beth

She doesn’t just play, she kills it.

Talented rock guitarist Beth Collins has been barely holding herself together for months, ever since her boyfriend and bandmate became the latest victim in a string of suspicious disappearances. When her brother is injured an accident and she sees something dark billowing around him as he hovers close to death, she’s convinced her sanity is collapsing for good.

Then she's accepted by a boarding school for the musically gifted. All of her new friends are bursting with talent, but they're also keeping secrets. Can she trust Vincent, who's so sweet that his very touch makes her fears melt away? Or Xavier, who's trying to tell her something but is hiding even more?

And will anyone be safe when her true Talent comes out?

One of the main reasons that I rarely read a book’s synopsis is that I like books to surprise me, and surprise me Until Beth certainly did. For whatever reason I had in my head this idea that Until Beth was going to be a contemporary story about a girl with some insane musical abilities coping with the grief of her dead boyfriend – frankly, a less emotional If I Stay. The incredible story of superpowers, intrigue, betrayal and surprising friendships that we got instead blew me away. It grabbed my attention immediately and slowly built up to this mind-blowing finale where everything we thought we knew was flipped around and plot twist after plot twist was hurled our way.

I love the characters. Beth had this savvy and feisty attitude but wasn’t all Katniss-Everdeen-bitchy about her situation. She took it under her wing, fought for what she thought was right but didn’t go all reckless and stupid about it. I also really loved Zuber!

Overall, I found this book to be shockingly awesome. The plot kept me on my toes and I was constantly wondering what was going to happen next. I loved the characters, especially our protagonist. I am dyingfor news about the sequel because I needed it like yesterday. 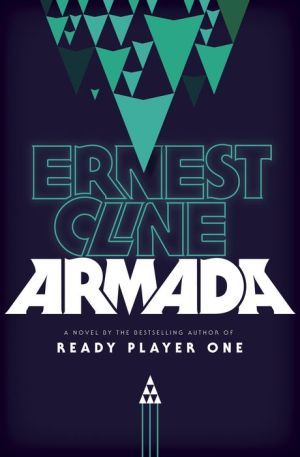 But hey, there’s nothing wrong with a little escapism, right? After all, Zack tells himself, he knows the difference between fantasy and reality. He knows that here in the real world, aimless teenage gamers with anger issues don’t get chosen to save the universe.

And then he sees the flying saucer.

Even stranger, the alien ship he’s staring at is straight out of the videogame he plays every night, a hugely popular online flight simulator called Armada—in which gamers just happen to be protecting the earth from alien invaders.

No, Zack hasn’t lost his mind. As impossible as it seems, what he’s seeing is all too real. And his skills—as well as those of millions of gamers across the world—are going to be needed to save the earth from what’s about to befall it.

It’s Zack’s chance, at last, to play the hero. But even through the terror and exhilaration, he can’t help thinking back to all those science-fiction stories he grew up with, and wondering: Doesn’t something about this scenario seem a little…familiar?

Armada was a hard book for me to review, thus this mini review of it. The main problem I had was that it (somehow) managed to be both mind-blowing and mind-numbing at the same time. I did enjoy it – mostly – but I could never really say that I was 100% on board with the story and that stopped me from loving it.

I loved our protagonist, Zack Lightman. He wasn’t perfect – he had some anger management issues – but he was a genuine, wholly fleshed-out character that really helped to shape out the story. I was even more impressed by the fact that despite the fact that this book was about “chosen ones”, the people that truly are the best of the best and are actually needed to save the world, Zack didn’t suffer from Chosen One Syndrome. He was unique, realistic and relatable. A win-win all-round!

The reason that I wasn’t able to enjoy this story as much as I hoped was partially because of the info-dumps, and partially because I never truly believed that this alien-apocalypse and video game conspiracy thing could ever be real.

The info-dumps were really bad for the first third of the story. I was grateful for them at times because my knowledge of video games extends only to my hours of playing Sing Star as a kid – I honestly don’t think I’ve ever touched a Xbox before. Oops! – so I’m being honest when I say my video game knowledge = 0%. I didn’t find the info-dumps particularly informative though. If their purpose was to help out the ignorant people like myself, they failed. I never quite understood what they were saying, which meant that I could not picture the battle scenes at all.

And like I said the plot – while unique, riveting and engaging – never felt quite solid to me, like it could happen in real life. Maybe that wasn’t the point, but I always think that apocalyptic stories should have an ounce of truth in them. It makes them more shocking then. Also, the ending didn’t work for me. At all. It was a little too easy. I wasn’t satisfied with it. It didn’t really clear everything up for me like I needed it to.

Overall, I am still not sure how to rate Armada yet. I enjoyed the story but it never got to me like I expected it to. The characters, especially our protagonist, were fantastic, and the unique storyline was fun. I’m happy to say that I read it despite everything, and would still check out the author’s other books so that’s a win in my mind.

Thanks for the recommendation, Bee!
Bee: You’re welcome! Ready Player One is even more awesome! Also, sorry for intruding. Go on. ^-^ 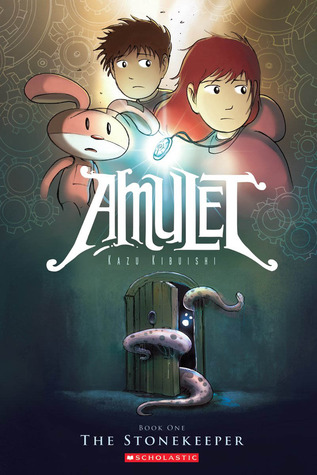 There's something strange behind the basement door...

After a family tragedy, Emily, Navin and their mother move to an ancestral home to start a new life. On the family's very first night in the mysterious house, Em and Navin's mom is kidnapped by a tentacled creature. Now it's up to Em and Navin to figure out how to set things right and save their mother's life.

This year I made it my goal to try and get into graphic novels. After about ten or so attempts – and fails – earlier this year I sort of gave up on the idea. It seemed that I  tried every “type” that I could get my hands on – graphic novel adaptions of some of my favourite books, prize-winning graphic novels, comic bind-ups… It seems they are just are not my thing. However, one day when I dropped in the library I saw The Stonekeeper on the shelves – well, I thought it was called Amulet. Oops! –  and recognised it from a YouTube video (don’t remember which one) so I thought that I may as well give it a go – why not, eh? And boy, I am so glad I took that chance!

I am not going to pretend this book is literary gold. It isn’t. But it was entertaining and rather adorable. The story was interesting and kept me in completely engaged. I loved the “adventure” feel to the story, it kind of felt like the younger brother of House of Secrets and The Emerald Atlas in that regard. I also loved the characters, especially Emily and Miskit. Emily had this feisty attitude to her as way of coping with all that she had seen and been threw and it bought her character to life.  Miskit was a nice balance to the fantastical elements and bought a little whimsicality to the story that made it such a successful middle grade novel. Also the fantasy world that was set up was awesome! I loved the new creatures, the house and the amulet – all of it worked well in combination.

And can I just say, my golly gosh how bloody beautiful was the artwork. It was so pretty! Both the colouring and art style were spot on, even the dialogue was done fantastically.

If you (also) haven’t been able to find the right graphic novel and love written middle grade adventure stories then I would happily recommend this book. Even if middle grade isn’t normally your thing, I’d still recommend it. Just give it a go you never know! I certianly didn’t going into it and now I’ll definitely be checking out the next couple of volumes. I have to say that this is hands down the best graphic novel I’ve ever read.

What is your favourite graphic novel – either series or standalone? I need any recs you can thrown at me.