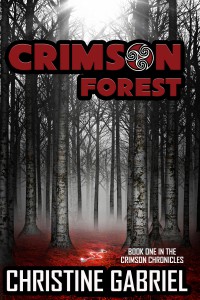 “Something horrible is happening in the Crimson Forest. I need you to promise me you’ll stay away from it.”

Eighteen-year-old Angelina Adams had every intention of taking that advice. She had no desire to disappear into the trees as so many hunters had done. But when her mother is brutally murdered in their home, and the attacker comes for her, she has no choice but the flee into the blood-red woodland that claimed her father’s life years before.

There she meets Nicolai, a handsome, mysterious stranger who vows to protect her fromt eh dark forces bent on destroying her life. But can he be trusted? Is he who he says he is, or will he simply take what he wants fro, her and move on?

Angelina soon realizes that nothing is as it seems in the Crimson Forest, a place where creatures known only to humans through myth and legend fight for love and survival. It’s a world where fairy tales, thrive, nightmares become reality, and some secrets are better left undiscovered. 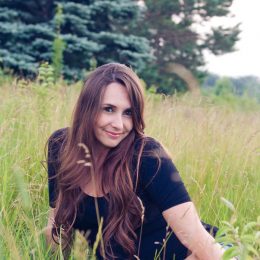 Christine Gabriel, a diehard Buckeye fan, grew up in the small farming community of Monroeville, Ohio where she spent much of her time writing imaginative stories. She has spent the last ten years managing a financial institution in Norwalk, Ohio in which she’s learned that compassion and love are her greatest gifts to give to others.
She has a small tribe of children who have become her biggest fans and most honest critics. She’s an avid animal lover and has been known to bring home a stray to cuddle with her while she writes. She’s also deathly afraid of earthworms and will cross the street in order to avoid one on the sidewalk. She loves vanilla coffee and can’t begin her morning without it, even knowing that doing so has consequential effects that could potentially cause a Zombie Apocalypse.
Christine’s most important view is that her readers are able to escape out of their realities and enjoy a little piece of her imagination. She holds each one of her readers close to her heart and loves them as if they were one her dearest friends. She currently resides in Norwalk, Ohio where she’s working on Crimson Moon, Book Two of The Crimson Chronicles series.