Which house would you choose?

FOUR HOUSES is a dark short story told in an unusual format that leaves readers wondering how they’d react if found in the same situation as seventeen-year-old Maddy.

This short story is 35 pages long.  However, these pages pack a punch.  It is very hard to talk about this story at all without spoilers, but I will say that it is VERY creepy, and is unusually told from ending to beginning. Maddy goes from one house to another trying to decide if she should stay there or not.  In each one of them there is something creepy and/or enticing to make her leaving harder and harder.  This story is unlike anything else I’ve read before. It was good, but horrifically so.

Title: This Night so Dark (Starbound #1.5) by Amie Kaufman and Meagan Spooner Tarver still has nightmares about the night, six months before the Icarus crash, when he rescued a group of civilian researchers being held hostage by brutal mercenaries. Now Tarver and Lilac must reconcile his memories of that fateful night with the truth that they uncovered on a mysterious planet after the Icarus crashed.

This novella is 109 pages long and it was amazingly good.  As you might remember (or maybe not!), I loved These Broken Stars and I was eager to read more about Lilac and Tarver.  This story is alluded to during the first book and it has to do with the heroic act that lead to Tarver’s swift promotion in rank.  As he wakes up from a nightmare, Lilac asks about the reason and Tarver tells him a story of bravery, being in the right place at the right time, and betrayal.  The even took place when Tarver was stationed in Patron and he happens to investigate faulty communication with a science station  and walks into a hostage situation.  What ensues is an action pack rescue operation while he’s aided by Sanjana Rao, the young and brave leader of the group.  A must read for fans of the series. Set in the months before Half Bad, Half Lies takes the form of a diary written by Michele, the sister of Gabriel, Nathan’s Black witch friend. Having fled Europe for Florida, Michele falls in love with a local White witch boy. There, she finds that the divide between the Black and White witch communities is just as dangerous as it was in the life she’s left behind.

This novella is about 60 pages long and it is the story of Nathan’s friend Gabriel and his family.  It is told in the first person, from Michéle’s POV (Gabriel’s sister) and it is heartbreaking.  On one hand, the siblings, which are Black witches, but not bad at all, have known tragedy and neglect in their short lives.  They love and depend on each other a lot and it is so touching how the communicate with each other using a diary.  Michéle falls in love with a White wizard and they fall prey to the “war” between both magical communities. We learn more about how they feel, about the importance of the coming of age ceremony and about finding your talent.  If you’ve read Half Bad, you know that this story doesn’t end well.  Another must read for followers of the series.

Have you read any of these?  Do you read/follow these series? 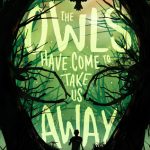 3 responses to “Novellas Review: Four Houses, This Night So Dark, and Half Lies”