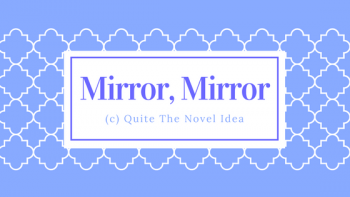 Mirror Mirror is the monthly feature that combines Stacking the Shelves with goings on in my life.

Hello! Another month is written into history. It was not without its challenges and heartache (and there has been so much heartache on a national level), but I hope you’re all doing well wherever you are.

What I’ve Been Up To

I’m still working from home and, starting Monday June 1st, will also be assisting with a hotline to get meals to senior citizens around the city. I’ve been going for walks almost every day now. It’s getting easier to dodge other people I see since I’m very weary about exposure to COVID-19.  I live with family members who are part of the vulnerable population.

There’s been some TV watching. I’m a huge fan of What We Do in the Shadows on FX; season 2 is in full swing. It’s hilarious and I highly recommend it.

I showed my aunt this movie called I Don’t Feel at Home in This World Anymore, a quirky drama comedy (?) about a woman who’s going through an existential crisis which only gets deeper when she’s robbed. Elijah Wood plays her martial arts-obsessed neighbor and he’s brilliant in it. I might be a tad biased since I love him so much.

Graphic novels have definitely become one of my must-read formats during this time. I’ve been lucky to find a majority of these on the library apps I use.

Best book of the Month: NIMONA. Why I had waited this long to read it, I have no idea, but I’m glad I did.

It’s become obvious that this period of my life is defined by buying books. I have purchased more books in the past couple of months than I have compared to last year.

If you are able to, consider donating to groups who are working toward and speaking up for change. A few are listed below.

8 responses to “{Mirror Mirror} May Updates”