A popular guy and a shy girl with a secret become unlikely accomplices for midnight pranking, and are soon in over their heads—with the law and with each other—in this sparkling standalone from NYT-bestselling author Anna Banks.It’s been years since Carly Vega’s parents were deported. She lives with her brother, studies hard, and works at a convenience store to contribute to getting her parents back from Mexico.Arden Moss used to be the star quarterback at school. He dated popular blondes and had fun with his older sister, Amber. But now Amber’s dead, and Arden blames his father, the town sheriff who wouldn’t acknowledge Amber's mental illness. Arden refuses to fulfill whatever his conservative father expects.All Carly wants is to stay under the radar and do what her family expects. All Arden wants is to NOT do what his family expects. When their paths cross, they each realize they’ve been living according to others. Carly and Arden’s journey toward their true hearts—and one another—is funny, romantic, and sometimes harsh.

I think this book brilliantly tackles a few topics at once. It tackles racism, poverty, grief, family, equal right, immigration, etc. Reading Anna Bank’s Syrena Legacy series, which is so lighthearted and fun would have never made you realize that this book was written by the same author.

This book is so much more real, because it presents to us the most normal of people, Carly Vega. She’s the daughter of illegal immigrants, but she was born in the U.S. Carly faces discrimination and prejudice because she “looks” Mexican. She has to work herself raw every day to scrape up money for at least groceries. Her life is far from easy. All her struggles really struck a cord with me. I’ve never faced that level of extreme poverty, so reading about it was a big reality check. I didn’t feel pity for her, though, I felt rage that this sixteen year old kid has to go through that. Carly’s a spitfire, she “carries her pride like a stick”, because of all that she’s been through. I never disliked her. I could see her inner turmoil and the facade she would build so no one could see her agony. I think she’s one of the most realistic characters I’ve read all year.

Arden is such a different male POV that I’m used to. He wasn’t arrogant, he wasn’t a jerk, he didn’t even spend ridiculously long amounts of time oggling girls. He was just a normal guy who had his fair share of problems as well. Arden is so complex, because he’s the most popular guy in school, the golden boy, but he feels so alone! I loved the sincerity that you could feel from Arden’s POV.

Of course, this book isn’t all about seriousness and drama. It also had plenty of hilarious moments that stemmed from Arden and Carly’s interactions. They were both so completely different from each other, that their personalities would sometimes clash and it would have the funniest results.

I also listened to a part of the audio of this book while reading, and the narrators are so good! Carly’s narrator brings lightness and humor, while still holding fast to the seriousness that is Carly’s POV. Arden’s narrator is so great. I loved his POVs because it felt like I was listening to a friend. The narration really made the book better.

Really, this book tackles so much in such a short amount of pages, that you’ll be amazed at how wonderfully it comes together. Carly and Arden have some honest and genuine voices that’ll stick with you long after reading. I recommend this book without a doubt. Thanks for my fellow Puertorrican for the review 🙂 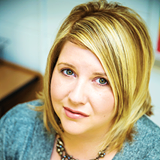 Grew up in a town called Niceville. No, seriously. I graduated from Niceville High School. So did J Lo’s second husband. And the guy that plays Aqua Man on Smallville dated my best friend.

Now I indulge my tendency to lie by writing the lies down and selling them to publishers. Well actually my agent sells it, so she’s an accomplice to lies. One of my lies is called OF POSEIDON. The sequel is called OF TRITON. The last and final installment is OF NEPTUNE, and it released May 13, 2014. Be on the lookout for JOYRIDE, my YA Contemporary out June 2, 2015–Bonnie & Clyde meets Latina Pretty in Pink!

And um. I also write adult fiction under pen name Anna Scarlett. One of the adult lies is DEGREES OF WRONG.

One response to “Marianne Reviews {Joyride by Anna Banks}”