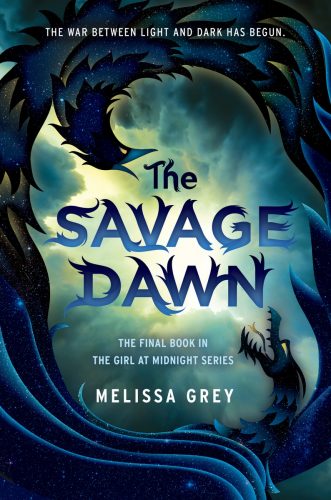 The Savage Dawn (The Girl at Midnight, #3)

The sides have been chosen and the battle lines drawn.

Echo awakened the Firebird. Now she is the only one with the power to face the darkness she unwittingly unleashed . . . right into the waiting hands of Tanith, the new Dragon Prince. Tanith has one goal in mind: destroy her enemies, raze their lands, and reign supreme in a new era where the Drakharin are almighty and the Avicen are nothing but a memory.

The war that has been brewing for centuries is finally imminent. But the scales are tipped. Echo might hold the power to face the darkness within the Dragon Prince, but she has far to go to master its overwhelming force. And now she’s plagued by uncertainty. With Caius no longer by her side, she doesn’t know if she can do it alone. Is she strong enough to save her home and the people she loves?

Whether Echo is ready to face this evil is not the question. The war has begun, and there is no looking back. There are only two outcomes possible: triumph or death.

*Sigh*  I debated back and forth on how to rate The Savage Dawn.  I really loved The Girl at Midnight and even though its sequel was not perfect, I was still more than eager to read the last installment, especially after the excruciating cliffhanger.  I was not entirely happy with The Savage Dawn and thus I will try to keep this review short, to the point and spoiler free.

I loved that we get to see the whole gang back together: Echo, Ivy, the Ala, Rowan, Dorian and Jasper and a few new characters.  I also liked that it was action packed, full of quests, mysteries, and such.  I think Echo grows a lot into her role and is more confident.  The sames happens to Ivy and I love her chapters too.

The romance is more developed in The Savage Dawn and it’s not secret that I adore Caius.  He is indeed one of the MCs and it shows in this book.  Echo and Caius learn to trust each other and to communicate much better.  The is no love triangle, but rather a determination to find what was lost and to save the world from the darkness. The romance between Dorian and Jasper is even more swoony.

The writing is awesome, the banter, the dialogue between the characters is amazing, witty, sarcastic, funny.

Now we come to my biggest issue with the story.  As you might know, I have an extreme dislike of open endings that this one has big gaps.  I was loving the story, the action, the romance, where everything was going, until the last battle and then it all went downhill fast.  Not only did I not get closure, but the battle seemed to be more about Caius and Tanith, giving it a much-ado-about-nothing kind of vibe that I didn’t’ care for.  It’s almost open enough to warrant another installment to the series or at the very least a novella. Very unsatisfying and extremely frustrating. Oh, and it made me cry to boot 🙁

Overall, the ending of the series is almost everything I was hoping for, but it left too many unanswered questions and it felt too open for me.

4 responses to “{Liza Reviews} The Savage Dawn by Melissa Grey”