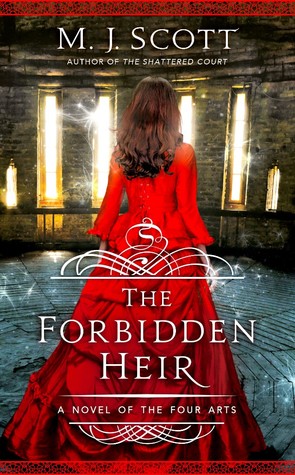 The Forbidden Heir (The Four Arts, #2)

Also by this author: The Shattered Court

She fled to save her life, but surviving what comes next might destroy everything she believes in…

The royal witches of Anglion have always been bound to serve their country. But Lady Sophia Mackenzie, whose unbound magic and near claim to the crown made her a target, was forced to flee Anglion, leaving behind a dead assassin and shattered loyalties. Now she finds herself in Illvya, where the magic is everything she’s been taught to fear and the only person she can trust is her new husband, Cameron.

Sophia and Cameron must navigate a strange world of illicit temptations, dangerous threats and political intrigue, where as a royal witch Sophia is both prized and reviled.

As she begins to master her powers, the factions seeking to control Sophia close in, and her magical and emotional bonds with Cameron are pushed to the limit. To survive long enough to claim the future she seeks, she may have to choose between love and loyalty, and hope the price of her choice is one she can bear.

Well, it was about time!  I read The Shattered Court in 2015 and I loved it and then I waited a while for the sequel.  I’m happy to report that it did not dissapoint at all.

The Forbidden Heir started where the previous book ended, with Sophia and Cameron entering the Academe in Illvya.  Not only did they had to flee from Anglion, but they did so in the middle of the night and they were not prepared for what’s to come.  The transition is hard.  The magic is practiced different here, there is a school were students are free to study whatever they want, Sophia doesn’t understand the language well and there are scary demons too.

Our royal couple gains asylum in the Academe were they enroll as students until they figure out who to trust and what is going on.  Sophia learns quite a bit about magic, some in class, some by accident.  In the meantime, Anglion sends an envoy to request that Sophie returns to her country as soon as possible.

Just like its predecessor, The Forbidden Heir has a lot of political machinations and plot twists.  Also, since it takes place in a new setting which involves new world building.  I really liked all of this, although I still don’t understand how the magic works and exactly what’s going on back in Anglion.

Sophie and Cameron haven’t been married for long, but they grow a lot as a couple, they truly love each other, and they got each other’s back.  Sophie knows a lot about how court politics work and she’s very smart and a fast learner, but she took some impulsive decisions too. Cameron is fiercely protective of his wife, but has the hope that they can somehow return to Anglion and the life they had before.  They make a really great couple.

The ending was a bit abrupt and unexpected and I’m not sure where the story is going next. Now, to wait for the next book and I hope it won’t be such a long wait 🙂 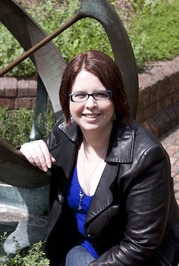 I was born in Melbourne, Australia but grew up in various green and grassy parts of Victoria. I moved back to Melbourne for uni and have stuck here ever since, apart from a brief sojourn in London. My life, apart from the day job, revolves around books, writing, the odd sewing, knitting, spinning or quilting binge and taking orders from my feline overlords.

My two great reading loves have always been fantasy and romance. I grew up reading Tolkien alongside L.M. Montgomery and Susan Cooper, Diana Wynne Jones and David Eddings mixed with Heyer, Austen and all the Harlequin and Loveswept books I could find. So I guess it’s inevitable that I wound up writing books that incorporate both genres.

I’m the author of the Half-Light City series, a dark fantasy quadrology for Roc and The Wild Side, an urban fantasy trilogy (Book 1 & 2, The Wolf Within and The Dark Side out now). My new dark fantasy series for Roc began with The Shattered Court in April 2015. More about that on my books page. I also write contemporary romance for St. Martin’s Press as Melanie Scott.

2 responses to “{Liza Reviews} The Forbidden Heir by M.J. Scott”