The Scorpion Rules (Prisoners of Peace, #1)

The world is at peace, said the Utterances. And really, if the odd princess has a hard day, is that too much to ask?
Greta is a duchess and crown princess—and a hostage to peace. This is how the game is played: if you want to rule, you must give one of your children as a hostage. Go to war and your hostage dies.
Greta will be free if she can survive until her eighteenth birthday. Until then she lives in the Precepture school with the daughters and sons of the world’s leaders. Like them, she is taught to obey the machines that control their lives. Like them, she is prepared to die with dignity, if she must. But everything changes when a new hostage arrives. Elián is a boy who refuses to play by the rules, a boy who defies everything Greta has ever been taught. And he opens Greta’s eyes to the brutality of the system they live under—and to her own power.
As Greta and Elián watch their nations tip closer to war, Greta becomes a target in a new kind of game. A game that will end up killing them both—unless she can find a way to break all the rules.

First, thanks to Liza at Reading with ABC for giving me the chance to read this awesome book!  Of course the cover first grabbed my attention, but once I read the synopsis I knew it was one I had to read.  And so when Liza posted that she needed a little help with a few of her review books, I jumped right on the chance to read this one.  Right before I started reading, I had someone say they didn’t really enjoy it, which made me a bit worried. But once I picked it up and started reading, any worries were gone as I loved the unique ideas and interesting take on how AI could take over our world.

The story takes place in a dystopian future where the artificial intelligence was asked to help humans solve their problems, and so what it chose to do was take over for them.  And one of the big things to solve was all the war and fighting that was really not necessary according to the AI, which calls itself Talis.  In order to stop the wars and get to a peaceful world however, Talis chose to bomb cities around the world.  Once it had done that, it set up new rules and laws that governed the entire world.  The first one went back to an old tactic that armies used to use. They would kidnap the opposition’s child, or heir to the throne, and keep them in order to try to stave off war, or get the things they wanted.  Well Talis has gone one further in that he has taken the heir to every country’s ruler, be it a King or a President, and he raises them all in little places called Preceptures.  Here they will stay until either they become the next ruler of their country, or their country declares war on another country.  In which case the AI will send what they call a Swan Rider to kill them.  No second chances.

The main character of the story is Greta, and she is the heir from the area that we would think of now as Canada.  All her life she has grown up with a boy named Sidney, who is the son of the governor of the area known as the Mississippi Delta Confederacy.  Their countries have always been on the brink of war.  And they know that at any time the Swan Riders could come for them, and it would be at the same time if their countries went to war.  But there is a surprise, when Sidney is taken away by the Swan Rider, Greta is left.  And there is someone who is now taking Sidney’s place and his name is Elian.  Elian is obviously new to the whole being an heir thing, as he fights being there the whole way.  Fighting to the point that he is constantly getting shocked and punished by the robots/AI there at the Precepture to keep an eye on them.  Unfortunately his behavior will affect his whole group, which includes Greta and her friends that’s she’s grown up with.  While Elian is there, he will open Greta’s eyes to where she begins to question what she has always known is her destiny in life.  And when one country does the unthinkable, declares war and does it safely (they think), by taking over the Precepture and holding the hostages as their own hostages, it is as if all bets are off.  The torture and punishment that Talis had promised was over, becomes a reality, to Greta and her friends.

In the end Greta will see a way that might save her friends and her country, as well as her own life.  But at what cost to herself, as well as her friendships.  She will lose what she thought of as possible love, whether it was with Elian, or her friend Xie.  But I have to wonder, will it all be lost? Can her choice help to bring some changes to the way things are being run by the AI?  Knowing that this is supposed to be a series I have a feeling there will be more to her choice in the end.

I really loved the way the AI used this kind of old fashioned method of taking the hostages as a way to prevent wars.  I loved that the kids kept in the Preceptures weren’t spoiled, pampered brats. They were made to work the Earth and farm, as well as tend to animals, all to even provide their own food and necessities.  The example of the scorpion given from an Oppenheimer quote was really so perfect, and such a visually great thought.  I can’t wait to see what will happen to Greta with the changes she’d made at the end, and if we will see Elian again, or any of her friends.  I wonder what her relationship with Talis, the AI, will end up being, knowing the things we now know about him as well.

I highly recommend this as a very different type of dystopian, very real if you will.  I can’t wait to pass it on to my students when I get a copy ordered for my library, and I will be handselling it at the bookstore where I work. I am a high school librarian, and I work part time at a bookstore. I blog at Lisa Loves Literature. I love to talk to fellow book lovers. Authors are my rock stars! I read mostly YA, along with a few of my favorite authors from when I was younger thrown in, such as Stephen King, Dean Koontz, Steve Alten, and James Rollins to name a few. 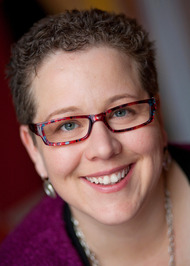 Hi! My name is Erin Bow — physicist turned poet turned author of young adult novels that will make you cry on the bus. I’m a white girl, forty-something, feminist, geeky enough to do the Vulcan salute with both hands — in public. I live in Canada. I love to cook, hate to clean, and yes, I do own a cat

« {From Page to Screen} Book-to-Movie Adaptions: Why You Shouldn’t HAVE to Read the Book
{Bieke Reviews} Willful Machines by Tim Floreen »

3 responses to “Lisa Reviews {The Scorpion Rules by Erin Bow}”