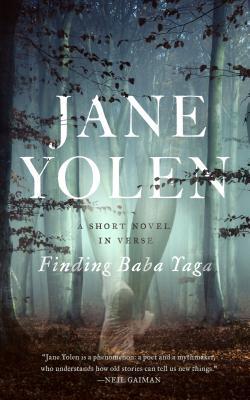 You think you know this story.You do not.

A harsh, controlling father. A quiescent mother. A house that feels like anything but a home. Natasha gathers the strength to leave, and comes upon a little house in the wood: A house that walks about on chicken feet and is inhabited by a fairy tale witch. In finding Baba Yaga, Natasha finds her voice, her power, herself....

A mythic yet timely novel-in-verse by the beloved and prolific author and poet Jane Yolen, “the Hans Christian Andersen of America.”

I wasn’t very familiar with Baba Yaga, the witch of Russian folklore who lives in a house that walks on chicken feet, has iron teeth, and a kinship with wild, independent girls. After meeting her in the Winternight trilogy, I knew she was something. After reading about her in Jane Yolen’s book, she strikes me as the type of woman I’d want to meet in real life.

This short novel is a feminist, coming-of-age fairy tale told in verse. Natasha is an endearing narrator. She wants more to her sheltered life and oppressive parents, so she goes out to the world and meets an old woman in the wood who changes her. Baba Yaga’s legend is hinted at, so much so I wonder if this was done to encourage people to do their own research about her. In this tale, she is the wise, crafty mentor and the innocent child, the witch and the woman. How does a woman of her power adapt to the times? Can she adapt to the changing times? It’s a look at the “old world” and the “new world.”

While wonderfully told, it is quite short. I feel that this could have been a full-length novel, but maybe that was also the intention of the book. It makes you long for wilder places and encourages you to embrace your own wildness.

« {Can’t Wait Wednesday} The Lady Rogue
{Top Ten Tuesday} Take Me Away to that Literary Place! »