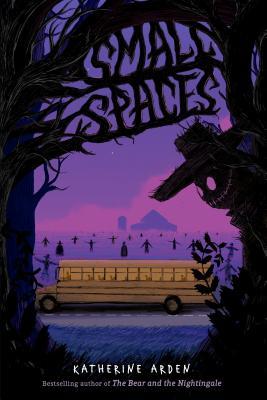 Bestselling adult author of The Bear and the Nightingale makes her middle grade debut with a creepy, spellbinding ghost story destined to become a classic

After suffering a tragic loss, eleven-year-old Ollie only finds solace in books. So when she happens upon a crazed woman at the river threatening to throw a book into the water, Ollie doesn't think--she just acts, stealing the book and running away. As she begins to read the slender volume, Ollie discovers a chilling story about a girl named Beth, the two brothers who both loved her, and a peculiar deal made with "the smiling man," a sinister specter who grants your most tightly held wish, but only for the ultimate price.

Ollie is captivated by the tale until her school trip the next day to Smoke Hollow, a local farm with a haunting history all its own. There she stumbles upon the graves of the very people she's been reading about. Could it be the story about the smiling man is true? Ollie doesn't have too long to think about the answer to that. On the way home, the school bus breaks down, sending their teacher back to the farm for help. But the strange bus driver has some advice for the kids left behind in his care: "Best get moving. At nightfall they'll come for the rest of you." Nightfall is, indeed, fast descending when Ollie's previously broken digital wristwatch, a keepsake reminder of better times, begins a startling countdown and delivers a terrifying message: RUN.

Only Ollie and two of her classmates heed the bus driver's warning. As the trio head out into the woods--bordered by a field of scarecrows that seem to be watching them--the bus driver has just one final piece of advice for Ollie and her friends: "Avoid large places. Keep to small."

And with that, a deliciously creepy and hair-raising adventure begins.

Katherine Arden’s Winternight novels are some of my favorites (my reviews can be seen here and here). When news broke she would make her middle grade debut with Small Spaces, the book made my must-read list. Atmospheric and a little spooky, it almost feels like a throwback to the books of my childhood.

Our main character is Ollie. She’s smart, sarcastic, and tries to push people away as much as possible. The reason for this takes its time to be revealed. The novel, for the most part, is patient with its plot and main character. Ollie’s feelings are acknowledged–she can be sad and angry, and it’s okay. However the book also acknowledges the fine line between feeling and forcing cutting herself away from everyone. How much longer can you keep trying to get people to stop caring for you?

The book takes place in small town Vermont. Fall is in the air; the descriptions of the leaves crunching underfoot and heavy coolness in the air are delightful. You can imagine apple picking and pumpkins growing in a field. When she meets a woman who’s trying to throw a book into the creek, who would have imagined it would lead to danger? When the children visit a farm for a field trip, there’s a corn maze and creepy scarecrows. This place is my ideal slice of heaven. But the scarecrows are another matter.

We are introduced to Brian and Coco, Ollie’s classmates, in the first half. The two characters break down preconceived notions. Brian plays sports. He also enjoys reading and cares deeply. Coco is sensitive. She is also clever and capable of great acts of bravery. As much as I cheered for the trio, I wanted to know more about Brian and Coco.

After their school bus breaks down, Ollie, Coco, and Brian team up to survive the entity known only as the Smiling Man. This is where the novel takes off quickly, which is jarring after the languid pacing of the first half. A lot is thrown at the reader: not only are the creepy scarecrows a force, but there are also ghosts and the mystery of Ollie’s saved book. It’s all fascinating but needed more development. The wrap up is great and leaves it open for continuation, which has a lot of promise.

Small Spaces is a good Fall read. Mind the scarecrows though.