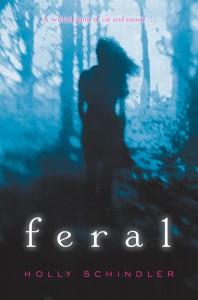 The Lovely Bones meets Black Swan in this haunting psychological thriller with twists and turns that will make you question everything you think you know.

It’s too late for you. You’re dead. Those words continue to haunt Claire Cain months after she barely survived a brutal beating in Chicago. So when her father is offered a job in another state, Claire is hopeful that getting out will offer her a way to start anew.

But when she arrives in Peculiar, Missouri, Claire feels an overwhelming sense of danger, and her fears are confirmed when she discovers the body of a popular high school student in the icy woods behind the school, surrounded by the town’s feral cats. While everyone is quick to say it was an accident, Claire knows there’s more to it, and vows to learn the truth about what happened.

But the closer she gets to uncovering the mystery, the closer she also gets to realizing a frightening reality about herself and the damage she truly sustained in that Chicago alley….

Holly Schindler’s gripping story is filled with heart-stopping twists and turns that will keep readers guessing until the very last page.

I’m very excited to host the incredible Holly Schindler in Reading with ABC today!  I read A Blue So Dark a few years ago and loved it, so I was eager to read her new book, and here it is!  Say hi to Feral 🙂

Can you describe FERAL in five words or less?

Who came first, Serena or Claire?

Serena.  The book started as an MG mystery about a tween girl hunting down the answers to a cold case surrounding the death of a former student at her middle school.  Serena’s manner of death and even some of her character traits stayed the same, even as I reinvented the book as a YA (I bumped the book into the YA category because I felt the grittier details made it a better fit for an older audience).  My protagonist needed to be reinvented for the YA version, though.  She really was specifically thirteen.  I needed a seventeen-year-old.  In the process of brainstorming who my new main character (Claire) would be, I discovered her backstory—and the brutal gang beating she endured.

Why did you make the cats (the “ferals”) such an important part of the story?

The gang Claire encounters in Chicago is wild.  Untamed.  Vicious.  She hopes that going to Peculiar for her father’s sabbatical will offer an escape from both her unrelenting nightmares and the horror of having to return to school to face classmates who all know that she endured a gang beating in a Chicago alley…

But Peculiar offers no escape—instead, Claire crosses the city limits only to be faced with reminders of the night of her beating.  I drew parallels between Peculiar and Chicago using an ice storm, school uniforms, dangerous things happening to young girls.  I also knew I wanted another group of wild creatures to taunt Claire in Peculiar—being a Missouri girl, I know how the barn cat population can explode.  It was perfect for the rural surroundings.  Also, when Claire finds Serena’s body, the corpse is being destroyed by the cats—just like Claire’s body was torn apart by a wild gang in Chicago.  Essentially, the feral cats are another wild gang…

I ultimately chose to use one of the feral cats (Sweet Pea) to illustrate how Claire feels about her own body, post-beating…The illustration comes to life at the end of the novel, during a scene at a school dance…

If Claire could read the book after its ending, what would she say?  How would she react?

What a wild question!  One of Claire’s biggest problems is that it’s completely unclear what’s real (one of the commonly-used aspects of a psychological thriller).  She’s got urban legends, potential ghosts, feral cats, a girl’s death that may or may not have been accidental.  What can she believe?

But Claire’s also really tough.  She’s sure she’s survived the beating in Chicago and has moved on from it.  So I think if she were to flip forward and see the end of this book, she wouldn’t believe it.  She’d slam the book and shake her head and think to herself, “No way.”

Claire’s also really smart, too.  She’s a straight-A overachiever.  And I’d think she wouldn’t be able to forget what she’d read.  She’d keep coming back to it, studying those last few pages, the scene at the dance.  And because she is so incredibly tough, she would decide to start to work through it all in the way that would be closest to her, as a journalist: she would write about it.

I’m not going to lie, Feral is creepy.  This is a psychological thriller that keeps the reader doubting what is real and what is imagined.

Claire survived a horrific attack. I mean, it was hard to read and I cannot imagine going through so much pain, physical and physiological damage.  She is so strong and truly tries to “get over it”.  I’m not sure how anyone around her – her friends and dad – can think that she can be okay after such a traumatic event.  When she moves to Peculiar, things start to get weird for her.

Serena and Claire’s stories intermingled until it’s hard to know what’s real. Some of the other characters felt more like a vague supporting cast and I felt like they could have played a bigger role. There is no romance in the book, not that it needed it. Just take the book as it is and enjoy the mystery of it all.

The setting is mysterious, foggy woods, cold weather, locked basements… you get the idea.  Not only that, but the feral cats are freaky.  Now, I’ve never been a cat lover, I’m both a little scare of them and allergic to them, but these cats are something else.  The story is twisted, and I have to confess to being somewhat confused for part of it.  I still love Schindler’s writing, which in Feral is more moody and darker. It paints pictures that are clear, allude to the senses and holds the reader captive.

Overall, Feral is a creepy, freaky, unique emotional thriller that will keep you enthralled till the end.

FERAL AND THE PSYCHOLOGICAL THRILLER

FERAL falls squarely into the realm of the classic psychological thriller.  While the book features mystery, horror, and paranormal elements, the emphasis is on the “psychological” rather than thriller / action.  The novel features a Hitchcockian pace and focus on character development (here, we’re exploring the inner workings of the main character, Claire Cain).  Essentially, every aspect of FERAL is used to explore Claire’s inner workings—that even includes the wintry Ozarks setting.  The water metaphor is employed frequently in psychological thrillers to represent the subconscious, and here is incorporated in the form of a brutal ice storm (that represents Claire’s “frozen” inner state).  The attempt to untangle what is real from what is unreal (another frequently-used aspect of the psychological thriller) also begins to highlight the extent to which Claire was hurt in that Chicago alley.  Even the explanation of the odd occurrences in the town of Peculiar offers an exploration into and portrait of Claire’s psyche.  Ultimately, FERAL is a book about recovering from violence—that’s not just a lengthy or hard process; it’s a terrifying process, too.  The classic psychological thriller allowed me to explore that frightening process in detail.

One Signed Hardcover Copy of FERAL (US Only) 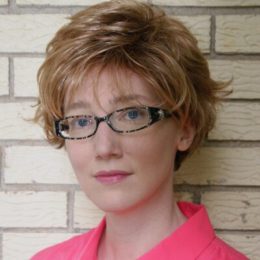 Her debut MG, THE JUNCTION OF SUNSHINE AND LUCKY, also released in ’14, and became a favorite of teachers and librarians, who used the book as a read-aloud. Kirkus Reviews called THE JUNCTION “…a heartwarming and uplifting story…[that] shines…with vibrant themes of community, self-empowerment and artistic vision delivered with a satisfying verve.”

FERAL is Schindler’s third YA and first psychological thriller. Publishers Weekly gave FERAL a starred review, stating, “Opening with back-to-back scenes of exquisitely imagined yet very real horror, Schindler’s third YA novel hearkens to the uncompromising demands of her debut, A BLUE SO DARK…This time, the focus is on women’s voices and the consequences they suffer for speaking…This is a story about reclaiming and healing, a process that is scary, imperfect, and carries no guarantees.”

2 responses to “Interview, Review and Giveaway: Feral by Holly Schindler”