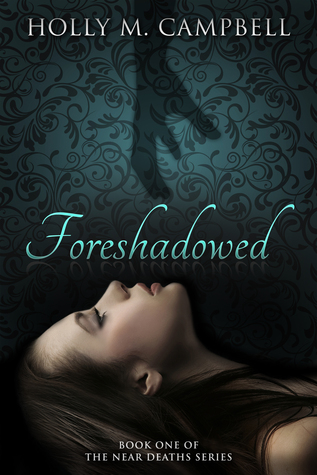 Hope Murdoch was born dead. The doctor brought her back, and now she’s an almost-normal sixteen-year-old. Normal: a hopeless crush on the boy next door, a negative body image, and a (mis)diagnosis of ADHD. Not-so-normal: an exhausting and distracting ability to read minds. And high school is hard enough without hearing what everyone really thinks of you.

Lance Hampton used to be normal until a car accident killed him and his parents. Paramedics brought him back to a life he doesn’t want: orphaned, uprooted and living with his uncle, and suddenly able to see how people die. At his new school, he tries to keep to himself. Seeing how complete strangers die is torture enough, let alone friends.

At first glance, Hope doesn’t think much of Lance (though a lot of the other girls do). He looks like the typical bad boy. No thank-you … but then she meets his eyes and everything goes dark. She hears labored breathing. Rapid footsteps. And then a thud as someone falls to the ground. Inside Lance’s head, Hope just witnessed a vision of murder … her own.

Together Hope and Lance try to catch a killer before he’s red-handed. A killer who could be anywhere. Anyone. Sure Hope can read minds and Lance can see death, but they still can’t see in the dark.

Well then. I’m not entirely sure what to say right now. This book had a lot of potential, honestly. The whole premise is interesting and pretty cool and not something I’ve seen that much in YA so far. But unfortunately it focused too much on the wrong things, which stopped me from enjoying it fully. And that always makes me sad. Because it could have been so great. But it just wasn’t.

I’ll start on a positive note though. As I said, the premise is really cool. I liked the whole idea of the gifts and the murder mysteries tied into the plot. I also liked Lance and kind of wished the story was written from his POV. Which brings me to the not so positives… The writing was fairly simple and there wasn’t anything really wrong it with it, but it just didn’t really grab me. That wasn’t helped with the story, which ultimately failed for me because it focused too much on the love triangle instead of the interesting parts. That kind of sucked the good out of it a bit for the most part. And while, yes the ending amped it up a bit, ultimately I didn’t really care anymore by that point.

What also didn’t help was that I failed to care for most of the characters. Well… all of them except Lance, really. I wished the story had been from his POV instead. It would’ve been so much more interesting. Because while Hope had her moments and I did feel bad for how she was treated at school, ultimately I didn’t care about her. The love triangle absolutely didn’t do her any favors. That brings me to Bryce, the third person in the triangle. Honestly, I don’t get why Hope liked him. He was a shallow asshole most of the book and he didn’t really change at all by the end of it. Nobody did except Lance. Which is very frustrating for me because characters to me are the most important part of any story. And these just didn’t do anything for me.

In the end Foreshadowed doesn’t quite live up to its potential for me. Though now that the love triangle seems to be out of the way, I might consider picking up the sequel, just to see if it’s better than this book. But we shall see if I ever manage to get to that.

« Time for a Giveaway!
{Leah Reviews} Life In A Fishbowl by Len Vlahos »

6 responses to “Foreshadowed ~ Another #ReadIndie Review”