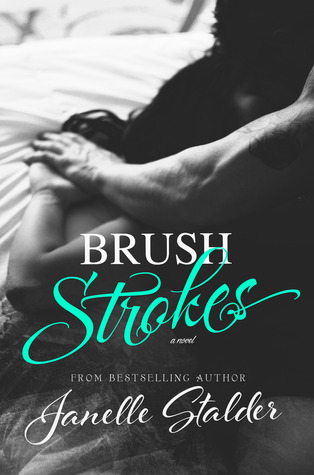 Art student, Olivia Banks, was living her dream at an exclusive school when everything came crashing down around her. Now back in the small town she grew up in, she's forced to spend her senior year at her old school where she's known as the 'freak', all because she'd rather focus on her painting than the trivial drama of high school. But things aren't the same as they were when she left. And the one thing that is turning her life upside down the most just happens to be the resident bad boy, Colt Morgan. Her senior year was supposed to fly by so she could pack up and leave again, but what happens when there's suddenly a reason to want to stay?

*This book contains strong language and some sexual content. For mature audiences.

God, how I loved this book!

So far I’ve read almost all of Janelle’s books (with the exception of Masked and Tested, which I’m going to buy soon, already read Switch though) and I’ve loved every single one of them. In fact, Janelle has become one of my favourite authors because of the amazing books she writes.

Having said that, Brush Strokes was more than I ever expected it to be. Sure, the basic story is the same one I’ve read a lot of times before, but her characters and the way she portrayed them and their story, had me devouring the book in barely a few hours and made me crave for more.

So let’s talk characters! For starters there’s Olivia one of the main characters and I love her. She reminds me of my friend, except for the art part, of course. She’s the kind of girl, I would have instantly become friends with in high school. She’s also so sweet and kind and really artistic, which I loved. As for her best friend Ella, she’s just awesomesauce and I LOVE her! Her bubbly, in-your-face attitude actually reminds me of … well … me, lol.

And then you have Colt, our main male character and holy moley can you say “scruuuuuuuuuuuuuuuuuuuuuuuuuuumptious”. I just wanna grab him, stick him in my bedroom and NEVER let him go. He’s a bad ass yet sweet yummy, yummy, yum-yum, which puts him in my top 5 of Book Boyfriends. Another character I want to name is Rannon, he’s yummy too, and I loved him, but despite all that he just lacked that je-ne-sais-qoui that I want in my main males when it comes to romance books, that would have put him in BB top 5.

Also, OMG for that misleading ending! I could not believe what I read and for the sake of not spoiling anything, I won’t say anything further on it. But damn, Janelle had me going there for a minute with that ending.

Having said all this, Janelle’s first try at a New Adult Contemporary Romance was a BIG succes for me and I’m hoping to see Ella’s story soon! Because I’m dying to know what kind of guy she’ll end up with!

« Best Book I Ever Read: YA Contemporary
Review: Essence by A.L. Waddington »