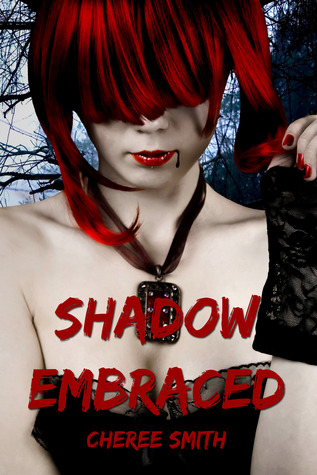 Those words haunt Scar's dreams. She thinks the creature that terrorises her while asleep isn't real, but when she's abducted and taken to a reform school meant to contain creatures too dangerous to function in society, she starts to wonder whether she isn't some monster.

She turns to an underground fight club full of vampires, werewolves and witches established by the students to control her urges, and who is she kidding, she loves to fight.

When fighters begin to disappear, turning Scar into the prime suspect, she must race to prove her innocence before her true nature is exposed.

The only problem is that she's not entirely sure she's innocent.

Shadow Embraced is about a girl named Scar, which is short for Scarlet. She loves fighting, as we read many times during the book. She also has strange visions in her sleep, when she has them she usually draws them out.

The story start of with Scar fighting because her best friend Alex got them into trouble and if you ask me I think Alex is a shitty friend. So because of she was out fighting and getting busted, Scar’s parents forbid her from hanging out with Alex. Of course, you know teenagers. Scar completely ignores her parents and skips school with Alex, only to end up in deeper trouble and discovering that she is a Damphir: a mix between a vampire and a human. So after that the story really kicks off. She taken to some secret school for werewolves, vampires and witches. She instantly becomes one of the most hates persons in school by both students and teachers (which I think in the teacher’s case is unprofessional) AND she has one of the school most popular and hottest guy chasing her tail.

So okay, the story wasn’t so bad, I liked the fights and most of the story. What I didn’t like where the high school clichés and also the fact that guys are instantly drawn to Scar like she’s freaking cat nip.

Character wise, I’m not that fond of Daemon, don’t ask me why, I just don’t really connect with the guy. Also Dahmin? He’s a total asshole and I hate him. Scarlet herself is okay, the author did a good job of representing the struggle inside her and the emotional up and downs she goes through throughout the book.

So the book was nice to read, it had it flaws but it also had its good points, which earns it a 3 star rating in my book.