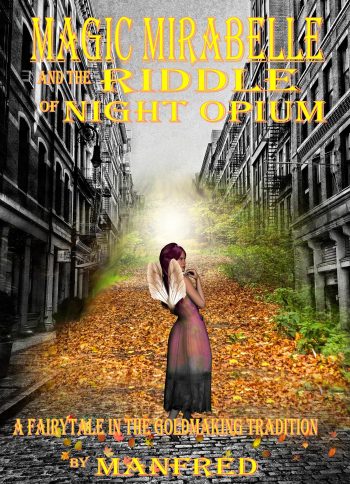 Magic Mirabelle and the Riddle of the Night Opium

If you liked Peter Pan, Alice in Wonderland and the Narnia and Harry Potter books, you will totally LOVE Mirador Publishing’s latest YA epic fantasy novel - “Magic Mirabelle and the Riddle of Night Opium.” The story begins in East Finchley London where, after making a Wish with her mother and little brother, the young Witch Mirabelle discovers a Magic Box with a very mysterious and enigmatic riddle in it.

The riddle has been left for Mirabelle by her admirer the Magician and Alchemist Night Opium, who wants to make the young Witch his apprentice and share his knowledge of Sorcery and Goldmaking with her. But neither the young Wizard nor Mirabelle fully comprehend the nature of the great powers that they are playing with and, not long after that, the young Witch discovers that her Romantic Fairytale has suddenly changed to become the most dreadful and sinsiter game: a game which has been played as part of the Rite of Passage of young Witches and Wizards for generations, called the Dungeons of Lethe (D.O.L.) Game.

To complete her Initiation as an apprentice Witch and emerge victorious in the D.O.L. Game, Mirabelle has to now overcome several powerful and deadly adversaries, including the deliciously wicked Lady Nightshadow and her ghastly Gold-making engines, as well as taking part in three Magical Battles or Tasks, each more psychologically demanding and gruelling than the last. If she fails or is defeated in any of these tasks not only will her own world of Magic and Fairytales be destroyed, but the sinisiter Lethean enchantments emanating from Lady Nightshadow's ghastly engines will continue to spin their Mistress's nefarious web over the inhabitants of the city of London.

Fortunately for her, Mirabelle has powerful friends and allies to help her in her struggle, the saucy one foot one Fairy, Apricot Lantern, the madly eccentric Father of Wishes and her devoted admirer, the Hermetic Goldmaker and Poet Night Opium himself. Eventually, during the third and last Battle with Lady Nightshadow, the young Witch realizes that for her to preserve her world of Magic and Fairytales and to save the world from a frightful Dystopian future, she will have to pool all her magic and resources together with Night Opium's knowledge of Sorcery and Hermetic Alchemy.

The nail biting climax to the story occurs, when one of London’s most prestigious theatre companies decides to ally themselves with the young Witch and her wacky Wizard by performing the latter's weird and wonderful poem, the Londres Witch. When the poem is staged, all of the power and magic from their pooled enchantment streams out into the historic centre of Westminster London.

Not long after, all the familiar places in the city like Trafalgur Square, Piccadily and Kensington Gardens become embroiled in the D.O.L. Game and the lives of the city's inhabitants is changed forever in a way that noone not even the Sorcerer or Mirabelle themselves could ever have foreseen,

See how in our amazing new YA fantasy adventure novel Magic Mirabelle and the Riddle of Night Opium!

Being disappointed by 2 books in a row, isn’t really how I had hoped to start my reading frenzy. I mean c’mon!

Magic Mirabelle and the Riddle of Night Opium was definitely not my cup of tea and I’m actually kind of mad it wasn’t.

It had held so much promise. And it had sounded so interesting! A girl who loves books and could use her own brand of magic to be a part of it. Now what could any book lover wish for more?

From the first to 66th page I read of this book, I felt so bored out of my mind.

All the philosophy and psychology woven into this story totally ruined the magical aspect of it for me. It was like I was being taught a philosophy lesson through a magical pair of glasses and through one very strange and unrelatable MC. Not to mention the constant info dumps. And I’m used to a lot of info dumps over the years, but this one takes the cake really.

The writing style wasn’t my favourite either, I think it was supposed to give one the feeling of being told a fairy tale by an old wise narrator. I did not get that feeling.  Also the phrasing and “conversations” are so stiff and rigid.

Mirabelle is also such a weird character. Now I don’t mind weirdness as a whole, but this was definitely a kind of weird that made me feel so “WTH” about her. She’s a walking contradiction! The times when she “speaks” she sounds so much older then any 13-year-old I’ve ever met in my life. At other times she acts and speaks like a bragging 6-year-old. And GAH WHAT THE HELL??? MAKE UP YOUR MIND AND STICK TO IT!

I’m sorry, that was mean. But really, I had such high hopes for this book and it didn’t deliver one any of them.

I’m definitely not looking forward to delivering this review to the Publisher and author. I almost feel guilty for not liking this book, because I know how hard and difficult it is to write a book. But I need to stay honest and as much as it pains, this book will definitely not ever make it to my favourite shelf.