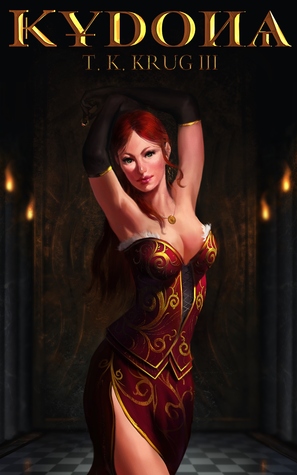 Named for heaven, the kingdom of Elessia once served as a beacon to the world. Now its name has become a byword for decadence. When Lord Prince Marcus de Pilars hears the beginnings of a vast conspiracy from the lips of his dying mother, he sets out to uncover the motives lurking behind the war his father waged. With the help of Kaelyn Beauvais—a sharp-tongued courtesan nursing a long-hidden desire—and Vernon de Gauthier—a near-disturbingly prolific womanizer with a weakness for apples—Marcus slowly unearths the truth: his country lies on the brink of collapse. And soon, the vanquished nation of Kydona will rise to settle a generation-old score.

In Elessia’s debauched court, the threat goes unheeded. Marcus’s romances bloom and just as quickly wither. Blood is shed, lives extinguished. It matters little. Quarrel and murder, lust and love, right and wrong—the lines that separate these are hopelessly blurred in the throes of court intrigue. And the difference between each rests on a knife edge so sharp that even a hero cannot tell them apart.

Kydona is the first installment of its series. The story continues in Kydona: From Ashes.

Alright, I finished this ebook and I must say I’m really surprised by it. It’s unlike most books I’ve read and I must commend mr. Krug for his amazing knowledge and ability to describe ancient weaponry, warfare, intrigue and court games.

Now there are some things I did not like about the ebook. For example, Marcus the main character is nothing short of a spoiled, arrogant, hot-headed prince, who I wouldn’t touch with a hundred foot long pole! The things he said, does and thinks sometimes in the book, made me want to hit him. He’s definitely NOT you’re average hero, that you swoon and sigh over. So okay, in that aspect Marcus intrigued me, because he is so unlike other heroes. But other then that he was completely unlikeable, along with several other characters like Jaspar and the entire Court. Sometimes it was so hard to put aside the dislike I felt for them, but I continued reading and I am glad I did.

Another thing I didn’t like to much, I sometimes found it hard to get past the overly formal sentences, descriptions and conversations in the book, sometimes it dragged on too long for it to be enjoyable.

Now what I did like about the book, that made me give it 3 stars are several things.

1. Kaelyn: this woman gives a damned new meaning to the saying “Hell hath no fury, like a woman scorned”. I have no doubt in my mind a lot of people will hate her. But the way she plays the court games, it just amazes me. She’s definitely someone you should watch out for, if she were real. Also, I like her sharp tongue and the barbs she throws at Marcus.

2. Jacquelyn: I don’t know exactly what it is that created the soft spot I have for this character. She’s just so sweet and likeable and I really enjoyed reading about her romance with Marcus (even if he was a prick, half the time).

3. Roslene Beauvais: This character is a fine, nasty piece of work and I applaud mr. Krug for creating her. Roslene is the consort of the King (Marcus’ father) and the way she plays her own court games and hides behind her skills as a courtesan to get what she wants, are amazing to read.

And 4. Vernon: Marcus’ best friend and a royal womanizer. He’s the kind of guy you either want to strangle or love. Naturally I love him because he’s funny as hell. Other then that I don’t have much to say about him.

All in all, I enjoyed this book and I must admit, I am now curious to read its sequel, Kydona: From Ashes.