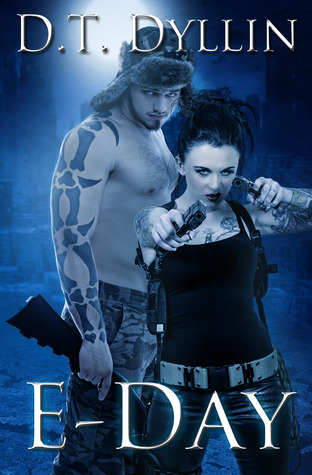 M-Day was the dawn of a brand new harsher world. A world where old lives could be left behind and secrets buried for good. At least that’s exactly what Tammie Miles had planned. But even with her new identity as Evo, she discovers that your past is never far. When a man from her old life tracks her down, will she risk everything to keep her secrets? Or will she finally learn that maybe even she can love the right man?

So this is a review for the Beta version of E-Day and I also need to tell you that I haven’t read M-Day yet (the first book), but I’m gonna now after I read this one, it was awesome!!!

So okay the story is about a post apocalyptic world where men have been infected with some kind of virus that kind of makes them go nuts, in a pumped-up-full-of-steroids-super-soldier-kind of way. It makes them violent in more ways than one and also zombie-like. The infected men are called I-Men and the uninfected U-Men. And Evo, along with Max and Zee have been going around killing I-Men and trying to find other survivors. Then they come across a warehouse where they find Evo’s ex-husband Bo, who re-named himself X. After he’s found it soon becomes apparant X’s not normal and Evo has to come to terms with the feelings she thought she didn’t have for him anymore.

What I loved about E-Day the most were the characters really. I thought Evo was kick ass!!! Short temper and all. She just has this way about her that just makes you both admire her and also just want to strangle her. Then there’s Max and Zee, who I thought were awesome as well. And X, well this is a tough one, mostly at the moment I feel sorry for him for all the things he’s been through, but he also annoys the hell out of me at certain parts in the book. So all in all, I like him … mostly anyway. There are other characters of course like Brandon and Izzy and Ivan and Rodney and also of course the main bad guy in this book, which was Raphael with all his I-Men underlings. I think it was actually kind of cool to have a gay bad guy! And yes I did actually just say that, LOL.

As for all the other stuff that goes, I won’t go into detail, because that would just ruin it for all the other readers out there who will have to wait until August or September if I’m not mistaken (HA! Sucks for you guys! 😛 Okay that was mean, I apologize … hmm wait no I don’t 😛 ) to get a copy of E-Day. It will definitely be worth the wait, because E-Day is awesome!!!