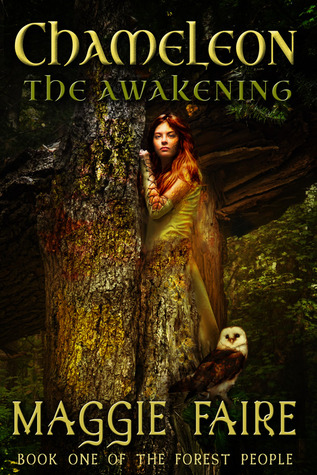 No identity. That’s what it’s like to be a human chameleon, and sixteen-year-old Camryn Painter wonders if she'll ever figure out who the real Camryn is—or should be. Just looking at someone else will cause her body to change into that person. Her parents called it her gift. She calls it her curse.

Then Ohar, a man with impossibly good looks and an ethereal manner offers her a way to claim her birthright by joining the Mazikeen as part of the Forest People. He says she is “the chosen” of the Forest People. The prophecy indicates her powers are beyond any others and she will save their world.

Camryn had always loved the Redwoods at her back door. The stories her mother spun of its inhabitants kept her entertained for much of her childhood. The problem is the stories are real. The forest people are real, human yet not human. They are faery and beasts, evil and angels, mutations of humans and animals over thousands of years. Then there's Dagger, a young man who distrusts the Mazikeen and Ohar, but admits to being a thief and only interested in his own pleasure. All of them want the Chameleon for their own agenda.

With the help of Ohar and Dagger, Camryn learns to control her identity so that she can walk among more than one world. Yet the more Camryn learns, the more she suspects there are too many secrets — dangerous secrets. There are no easy answers, and every decision she makes puts someone’s life in danger.

Right so I finally finished Chameleon now and I wasn’t all that impressed with it.

Chameleon tells the story of Camryn aka Wybune, who is the child of a Mazikeen and a Quatcho. Her mother died in childbirth and her father has been imprisoned for years. Camryn grew up with adoptive parents in the Agnoses (real) world. When her adoptive parents die, she’s taken to a place called Starlight Center (some kind of asylum) where she’s held until the day she’s visited by Ohar, the Prince of Mazikeen, who’s been sent by his mother to take Camryn back to the Forest People. But on their way they meet Dagger, a Boha’a Thief, who reveals that Ohar keeps more secrets then he’s willing to tell.

First of all the story could use some serious editiorial changes, because at times it felt like the author rambled on and I had to re-read several pages to really understand what was going on. It was also incredibly fast paced, now I don’t mind this, if the story is good, but it just felt like everything in the story happened to fast, without any real explanation as to why it happened and for what purpose.

The characters weren’t all that great either. Camryn isn’t very fun to read, even though she’s the main character, she shows no true personality and she shifts from being overly formal when she speaks to using teenage slang. It’s confusing. Ohar, well I just don’t like him period. And Dagger comes over as incredibly bi-polar, one minute he’s nice and good and the next he’s arrogant, mean and rude. It’s like he can’t decide who he really is (Camryn is the same in that aspect, to be honest).

So with all that said. It’s wasn’t the worst book I’ve read, it had a few good points (however small they were), so I decided on giving it 2 stars in the end. Because I just couldn’t justify giving it more then that.