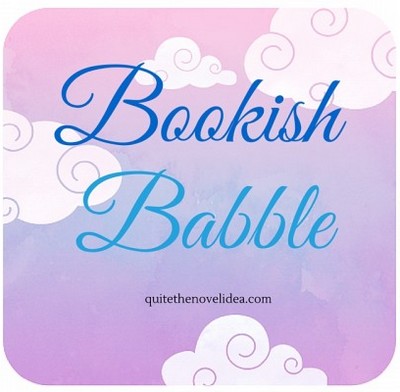 Lately I’ve been thinking a lot about reviewing – why we do it, how we go about, styles, #ownvoices, and all that. I came to the conclusion that I’ve lost my reviewing mojo. I experimented a lot last year with different review formats – lists, pro & cons, gif reviews, more ‘traditional’ written, long reviews… everything I could think of, and I found one thing that I loved: mini reviews. I know that mini reviews (or whatever you want to call them) are usually for DNFs or when you read a bunch of three-star books and don’t have much to say about them, but I’ve found that giving a quick little run down of my thoughts is what I prefer. Long reviews just aren’t working for me any more. I’ve read so many books in the last few years – since reading Goodreads, and starting to review books – that I’ve started to repeat myself. I talk about the same things in each review and it feels repetitive. It feels like I don’t have much to say any more, or I’ve just forgotten how to write it down. I’m running out of unique ideas, and ways to phrase “it was a good book, not brilliant not bad, just a generally good read” – which I seem to say all the time!

A lot of my favourite BookTubers have talked about this lately too. They seem to have hit the same obstacle as me this year and a lot of them are fighting it by posting little reading update/wrap ups every now to replace review videos. I love this idea! Essentially what they do post a video for every four or five books they read and talk briefly about their thoughts on each book. They’re short, snappy videos (like mini review posts) but they work. At the end, some of them talk about what they’re currently reading or what they plan on picking up next too.

I’ve decided to adopt this format for a little while, to see how it goes. If it works, perfect. If not, I’ll think of something else – it cannot hurt to try right? I’m not sure how often I’ll do these posts. For now, I’m thinking maybe every three books or so? It depends on how quickly I read and how much I have to say about books. I may put four or even five books in a post. Depends.

And I decided that I may as well starting this idea at full speed… so I have my first try of this new format happening right now, below.

Reign of Shadows by Sophie Jordan // ★★★

This was a super fast, easy read that was fun and addictive, but nothing brilliant. I loved the setting and the whole permanent darkness situation. The world itself could have done with some fleshing out though – the political situation and all that. The plot was okay, and the action scenes an admirable attempt. It was easy to follow – although the actual point of the journey was kind of lost on me. Luna, our blind protagonist, was my favourite part of the story. She didn’t let anything stand in her way and pushed herself so she wouldn’t be dependent on anyone. Fowler on the other hand… yeah, I wasn’t a fan. I don’t see the appeal, honestly. He’s arrogant, self-centered and a little shallow. I never came to care for him, and I didn’t like his POV chapter nearly as much as Luna’s. The romance was also just a no-no for me. I didn’t think Fowler and Luna had any chemistry, whatsoever. It was too forced and cringe-worthy. And then the ending made me angry. Ugh! Too much of a cliff-hanger when the sequel isn’t even planned yet. I’ll have to keep an eye on the Goodreads pages. I have feeling the sequel is going to be more devoted to world-building so that’s exciting.

I read this for my English class at school, and it’s one of the few classics that I’ve actually enjoyed. In fact, it might even be the only one! The story follows two friends during the Great Depression in America. It’s a very simple story. Made up (nearly entirely) of dialogue, and only about 120 pages. I don’t think it’s the type of book I’d just go around recommending it. It’s not very exciting. The plotline is a little slow and plodding, despite its shortness. It mainly sets out to describe the era and its effect on the population, but also broaches the topic of racism, sexism, loneliness (which we’re studying) and mental illness. One of the main characters, Lennie, is “simple” (the time had pretty much no knowledge of mental illness or intellectual disabilities so that’s how they explain it) so the exploration of his place in society at the time was probably my favourite part of the story. I think it’s pretty powerful in that way, but really only for a specific audience. It definitely affected me emotionally, and got me thinking so that’s a plus.

I was hella nervous to get into this story to be blunt. I hate endings. I especially hate endings to series that I love. It’s too much for my heart… but Cynthia Hand did an incredible job with this finale. Like phenomenal. I have nothing negative to say. It did so much for my heart and feels. The twists and turns were on point – it had me literally gasping out loud at least twice, and I never do that. The characters were the same characters that I fell in love with. Clara is seriously one of my all-time favourite female protagonists. She’s so realistic and loveable. The action had me flipping the pages with a frenzy. The romantic tension… *shakes head with speechlessness*. And then the ending… perfection. For a second there, I thought all had gone to hell. I actually threw the book across the room with outrage and had to pace a lap around the house to cool myself down (the only time this has happened to me!). But then I came back and read the epilogue and all was well. This series is just incredible, and I’d recommend to everyone, honestly.

I was disappointed with this volume. I was a little hesitant to pick it up as it had been awhile since I’d read Volume 4 – my library is slow at buying new graphic novels/comics! – but that wasn’t a problem at all, thankfully. it was easy to remember where the characters were and what they were up to as soon as the volume began. The actual problem I had with this was that the plotline was super flat. It felt like a lead-up to the next volume. Only small events that led to the bigger situation the bind-up ended on actually occurred and now all that will have to be explored next time. Snore. I don’t care about the next volume yet, I’m reading this one! I also really missed Marko. He was weird as hell in this edition, and he’s usually my favourite character. I missed Hazel’s narration – it wasn’t so prominent in this edition. The scene with the pissing/masturbating giant lizard monster has scarred me for life too. *shudders*. Disgusting. 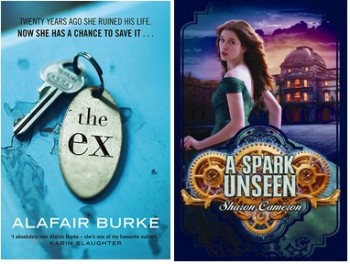 The Ex by Alafair Burke

This is a legal thriller that I have for review (thanks Allen & Unwin Australia!). It’s been blurbed (yeah, I think that’s a made up word but no one needs to know… shhh) by Gillian Flynn, Michael Connelly and Karin Slaughter so it’s pretty well represented. I’m about 120 pages into the story (halfway), and it’s not too bad. It’s not as thrilling as I would have liked. It’s more just Olivia (the protagonist – a criminal defense lawyer) trying to get the charges dropped against Jack, her client and ex-fiance. There’s been a lot of tangents about their history together and it’s a little deterring to be pulled back in time so awkwardly. I think dual narration – but going between Present Olivia and Past Olivia – would be 100% better and flow the story along better. We’ll have to see how it goes.

A Spark Unseen by Sharon Rook, narrated by Fiona Hardingham

I loved the first book, and I’m loving this second book too. The story is taking a very different turn from the plot of the first book, but that’s not a bad thing at all. I love these characters so much and I just cannot wait to see how everything is going to wrap up. I’m listening to half an hour of this a night before I go to bed, but it’s turning into forty minutes or even an hour lately because I’m enjoying it so much. Hardingham does an incredible French accent!

What do you think of my new reviewing format – worth keeping up or a complete bust? Be honest! You’re the ones that have to read my posts if I decide to keep it up. Oh, and have you read any of these books too – thoughts? 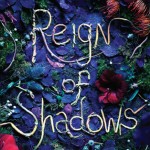 32 responses to “{Bookish Babble & Rachel’s Reviews} A Change in Reviewing Format – My Reasons, Your Thoughts”