Hi there my gorgeous readers!  I’m always in the lookout for new reads an Perfectly Oblivious sounds like a great YA romantic comedy.  I hope to read it soon, and in the meantime you get a preview: 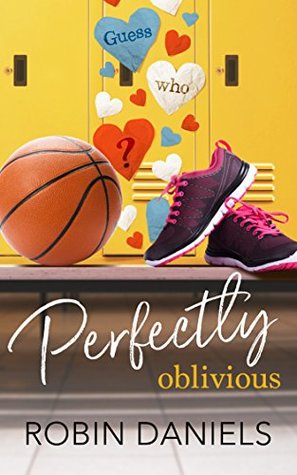 Cameron Bates (Cam) could have almost any girl at Franklin High School…except for the one he wants. Unfortunately, Bebe seems to be immune to his flirty charm and good looks, which means one of two things: a) she’s completely oblivious to how he feels, or b) she’s just not into him. If that’s the case, declaring his love would be disastrous for their friendship.

Bianca Barnes (Bebe) has a huge problem: the universe hates her. Every time she admits feelings for a boy, he ends up falling for her sweet, popular, and beautiful sister Beth. To avoid a broken heart, Bebe has sworn herself to secrecy. Nobody can ever know how she feels about Cam…Ever!

Neither person wants to confess their feelings, but the universe has its own plan. Out of the blue, Bebe is courted by a secret admirer. Cam has to step up his game and Bebe has to make a choice. Play it safe and accept the affections of her mystery man or challenge fate and take a chance on the boy she loves.

I’d hoped to catch the new kid’s attention by shooting some hoops on the driveway next to his. But after five minutes of flawless shots, his face was still hiding under his hat and his eyes hadn’t left that stupid phone. I wasn’t desperate enough to go talk to him (Ok, I almost was) so I devised a plan to get his attention in a more subtle way.
On my next shot, I intentionally hit the backboard so the ball would bounce off and roll toward him. If he’d seen that shot, I’d have been super embarrassed. I’d never want anyone to think I sucked that bad. But, as luck would have it, embarrassment was not in my cards. Mortification was a better word for what had happened. The missed shot that was supposed to bounce somewhere in his general vicinity was alarmingly accurate. It beaned him in the side of the head, knocking his cap off.
“What the hell?” he grumbled as he rubbed his head and shot a dirty glance in my direction. Oops. Not quite the first impression I was hoping to make. So much for subtle.
“Sorry.” I offered a quick apology, then ran to fetch my ball from the street. I made it back to the driveway, and he strolled over. Now that his baseball cap was off, I could see that he was pretty stinking cute. He had light-brown hair that was long enough to be messed up from wearing his hat but short enough not to stick out under the sides. His blue eyes sparkled (yes, I know how cheesy that sounds, but there is no other way to describe them), and he had a cute button nose. I must have admired him a little too long because he cleared his throat and smirked, revealing the most adorable dimples.
Crap, crap, crappity-crap. He totally realized I was checking him out. Play it cool, Bianca, play it cool…
“Hey,” was all I could manage. I gave him a head nod. Great; in my attempt not to look desperate, I managed to look like a loser instead.
“You play ball?” he asked, a cocky smirk plastered to his face.
“It would seem so. Seeing as I’m standing here, under a basketball hoop, holding a ball of the basket variety.” That’s good, Bianca; go for snarky. Maybe he’ll forget the moony eyes he caught you making at him.
The new kid snorted. His cocky smirk morphed into a cocky smile. “Well then, I propose a deal. I challenge you to a game of PIG. If you can beat me, I promise to pretend that I don’t know you purposely tanked that shot as an excuse to talk to me.”
My eyes bugged and my jaw dropped for a moment before I was able to regain my composure. So that’s how he was going to play it?
“Hmmm…” I pretended to think as I brought my finger to my lips. “Then I guess if I win, I promise to forget that”.

One response to “{Book Blitz} Perfectly Oblivious by Robin Daniels”