Also by this author: Salt & Stone

War between heaven and hell is coming, but Dante Walker makes it look damn good.Dante’s girlfriend, Charlie, is fated to save the world. And Aspen, the girl who feels like a sister, is an ordained soldier. In order to help both fulfill their destiny and win the war, Dante must complete liberator training at the Hive, rescue Aspen from hell, and uncover a message hidden on an ancient scroll.Dante is built for battle, but even he can’t handle the nightmares where spiders crawl from Aspen’s eyes, or the look on Charlie’s face that foretells of devastation. To make matters worse, the enemy seizes every opportunity to break inside the Hive and cripple the liberators. But the day of reckoning is fast approaching, and to stand victorious, Dante will have to embrace something inside himself he never has before—faith.

Welcome to Reading with ABC’s stop of Victoria Scott’s The Warrior!  I’m so incredible excited for the conclusion of the Dante Walker series and I’m sure you are too.  To see the rest of the tour, click here. Now, on to the review!

Pow!  Yep, that’s how awesome the conclusion of the Dante Walker series.  Dante, how shall I miss you!

I really love this series guys!  You read my reviews of The Collector and The Liberator

Dante Walker is an awesome character.  He is conceited, a bit selfish, handsome, over confident, but also loyal, loving, and tries really hard to do the right thing.  Dante’s mind is an awesome place to be for sure (you can find some quotes at the end of the review as proof.)  Since the story is told in the first person, from Dante’s POV we get to experience him in all his glory.  I think that over the course of the series, he has grown and changed a lot, without ever loosing himself and his awesomeness.

Charlie is the foretold savior, and she is trying to come to terms with that and what she must do.  She is keeping secrets (even if it is justifiable) from Dante and didn’t like it one bit.  She was mopey, misleading, and somewhat depressed and didn’t share anything important with him.  Dante and Charlie’s relationship is so amazingly sweet.  I mean, Dante is SO in love that we would do anything for Charlie.

There is an incredible cast of characters that expand from Annabelle, Blue, Aspen, Lincoln, Kraven, Max and Valery, which we’ve met before.  We get to meet the ‘human’s that work at the hive and other characters, the more colorful was Oswald.  Since the full blown war we were expecting does happen, we lose some characters, and I have to say that I was very sorry to see them go. I really can’t explain a lot more without giving a lot of the plot away.

The Warrior is action packed and full of twists and turns.  There are some things that I didn’t see coming at all, and they made the story a lot better.  Can I say again how much I love Dante?  Well, that wouldn’t be possible if it weren’t for Victoria Scott’s writing.  She is amazing! (Not only with this series, but with her Fire and Flood book as well.)  I loved the epilogue, and I’m just putting it out there *I think there is room for another series based on Dante* just saying (and wishing!)

Overall, The Warrior was the perfect ending for a great series, and as I said, I’m very sorry to see you go Dante *sigh*

Some quotes for you (from the ARC):

“I made you dinner with my own two man hands.”  I cup Charlie’s chin. “So you need to prepare yourself for the mind freak that is my culinary skills.”

“Should I call Wolfgang Puck?” she asks, smiling.

“And tell him he’s out of business? Yeah, you might want to give him a heads up. I’d be the honorable thing to do.”

“A dude as old as air shuffles into the room.  He’s got tufts of white hair sprouting from every part of his body, and his arms are way, way too long for his torso…But the most amazing part of this dude is his ears; they’re as big as my palms. Many old people are hard of hearing, but I bet this guy could hear a beetle fart from six hundred miles away.”

“You always wear plaid?” I say.

He laughs. It’s too loud for what I said, and he seems to realize it. He coughs into his closed fist. “I love the stuff.”

“Woman,” I say. “You are getting way to close to my precious” 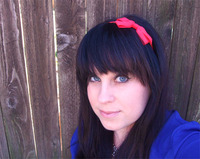 Victoria Scott is a teen fiction writer represented by Sara Crowe of the Harvey-Klinger Literary Agency. She’s the author of the FIRE & FLOOD series published by Scholastic, and the DANTE WALKER trilogy published by Entangled Teen. Her books have been bought and translated in eleven foreign markets including the UK, Turkey, China, Poland, Israel, Germany, Australia, Brazil, Taiwan, New Zealand, and the Netherlands.
Victoria lives in Dallas with her husband and hearts cotton candy something fierce.

2 responses to “Blog Tour, Review and Giveaway: The Warrior”